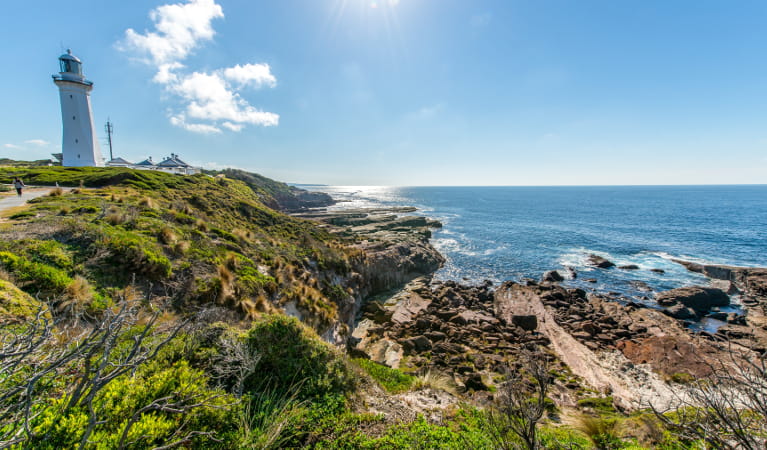 Green Cape Lighthouse, around 45min south of Eden, is the southernmost lighthouse in NSW. Towering above Green Cape Lightstation Keepers’ Cottages, soak up the maritime heritage and spot migrating whales.

Green Cape Lighthouse is steeped in seafaring history. Discover heritage architecture and take in spectacular ocean views on wild and windy Green Cape. The spectacular and rugged coastline is a fantastic whale watching spot in spring.

Learn about disasters and survival, like the passenger ship Ly-ee-Moon, mysteriously wrecked below the lighthouse in 1886. Tombstones of those shipwrecked lie among the rolling green hills at the foot of the lighthouse.

You may need an all-wheel drive vehicle to travel the unsealed road to the lightstation in wet weather.

To enter the lighthouse, join a tour and climb its stairs for panoramic views of Disaster Bay. 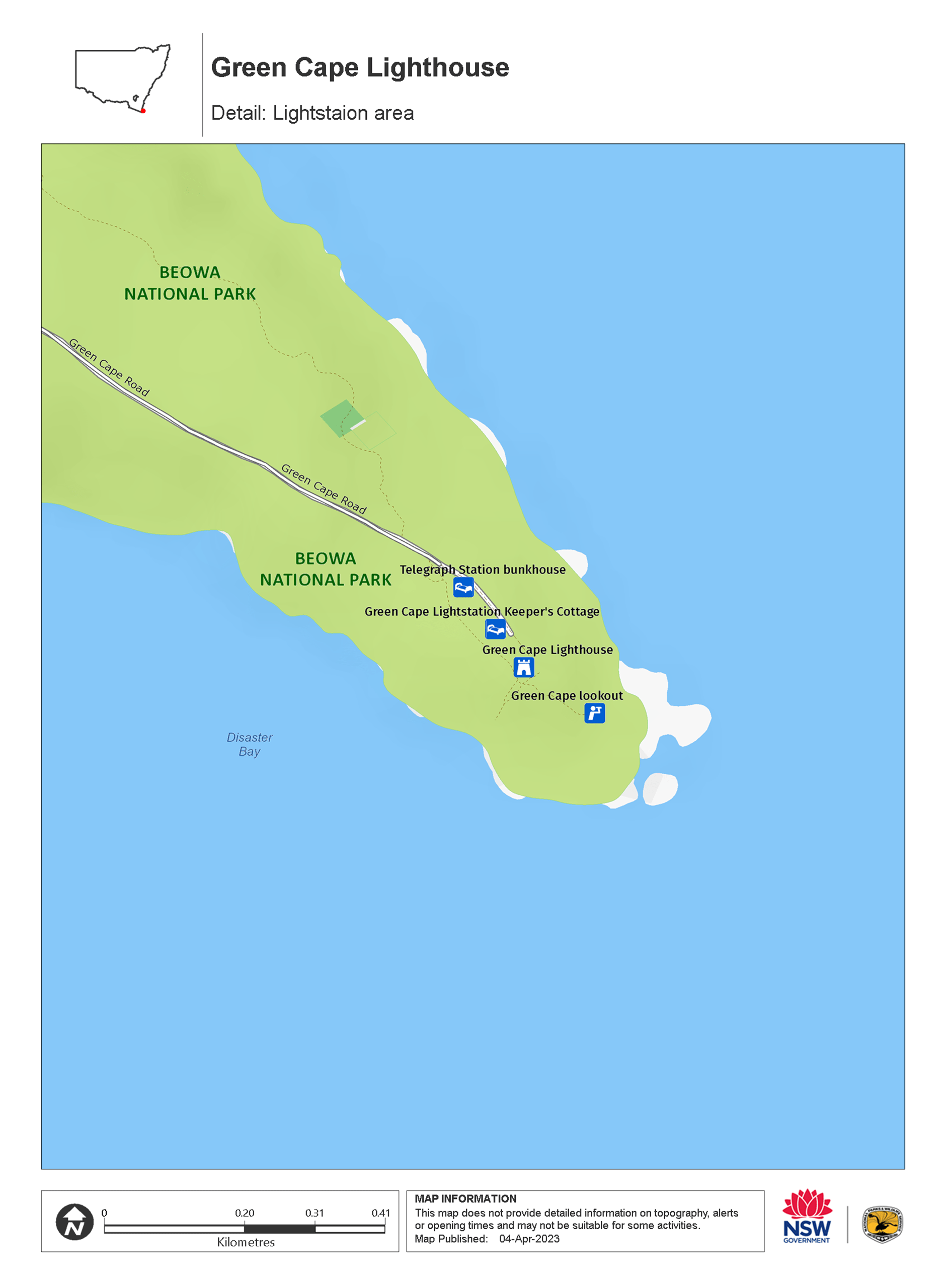 For the latest updates on fires, closures and other alerts in this area, see https://www.nationalparks.nsw.gov.au/things-to-do/historic-buildings-places/green-cape-lighthouse/local-alerts

All the practical information you need to know about Green Cape Lighthouse.

Green Cape Lighthouse is in Green Cape area. Here are just some of the reasons why this park is special: 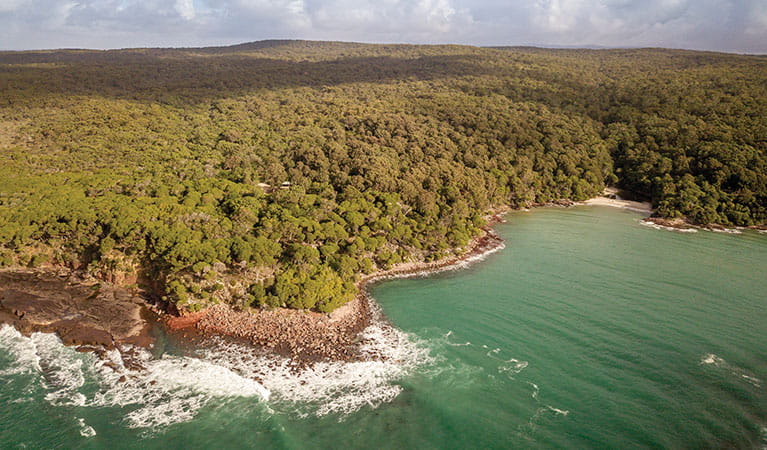 The Yuin People are the Traditional Owners and Custodians of Beowa National Park and they have a long and complex relationship with the coastal environment. At Twofold Bay, the Yuin People had a special relationship with the orca whales. The orcas drove humpback whales into shore, the people used spears to kill them and the orcas and people shared the meat. Aboriginal people later taught European settlers to work with orca whales during the shore-based whaling days of Twofold Bay.

Giants of the deep

Enjoy some of Australia’s best whale watching here between September and November when hundreds of whales and their calves move in to Twofold Bay to frolic and feed before migrating south to Antarctica. You can get a good view of Twofold Bay from the viewing platform at Boyds Tower. At the southern tip of the park, see if you can spot whales near Green Cape Lightstation or Disaster Bay lookout. 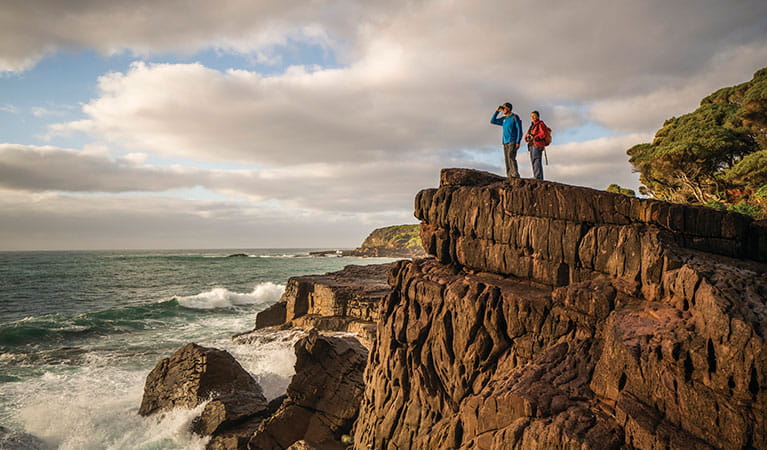 Beowa’s stunning rock formations, inlets and headlands are the result of extensive geological folding. Most of the park lies on red, brown and green shales, sandstones, siltstones and quartzites. They were formed in the Devonian period around 360 million years ago—before dinosaurs roamed the earth. You can see these rock types exposed along the cliffs and headlands. The Devonian period is known as The Age of Fishes and internationally-significant fish fossils have been found in several places along the park’s coastline. 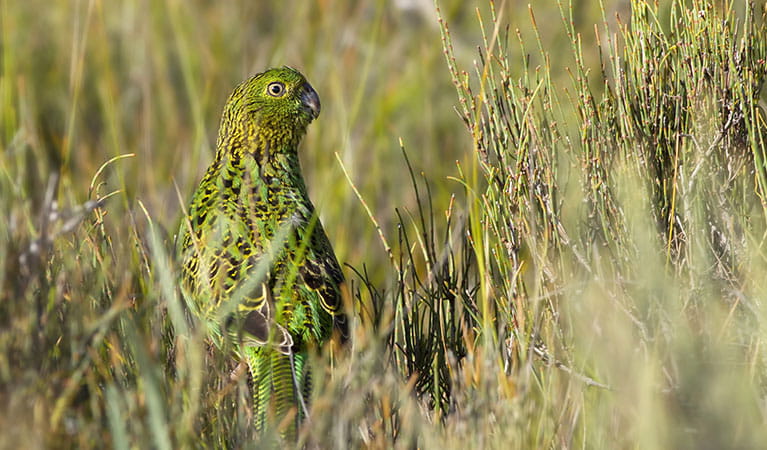 The heathland in the Green Cape area of the park provides significant habitat for vulnerable species like the eastern ground parrot and striated fieldwren. It’s also a stronghold for NSW’s population of the endangered southern brown bandicoot. Around 50 native mammals and nearly 150 species of birds have been recorded in Beowa National Park, including 1 critically endangered bird, 4 endangered animal species and 25 vulnerable species. 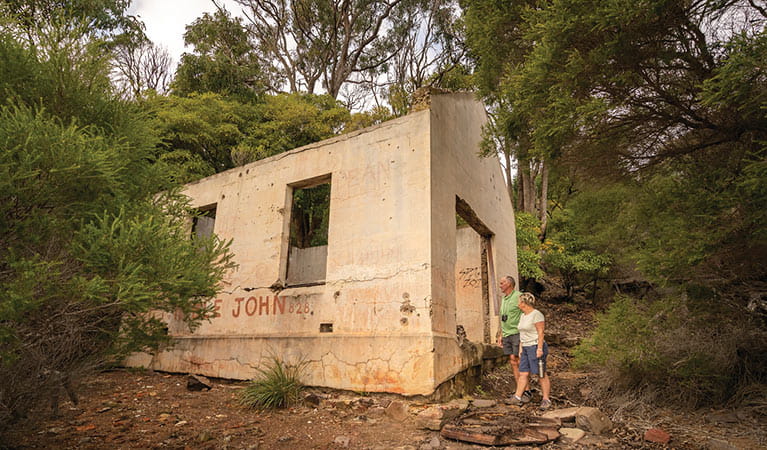 The first shore-based whaling station on mainland Australia was set up at Twofold Bay in 1828. Benjamin Boyd established a competing business and built a private lighthouse, Boyd's Tower, and a township, Boydtown, before being declared bankrupt. The coast was the site of many shipwrecks. Green Cape Lighthstation started operation in 1883 but shipwrecks continued, including the Ly-ee-moon that sank in 1886. You can pay your respects to some of the 76 victims at a graveyard a short walk from the lighthouse. There are also regular guided tours of the lighthouse.