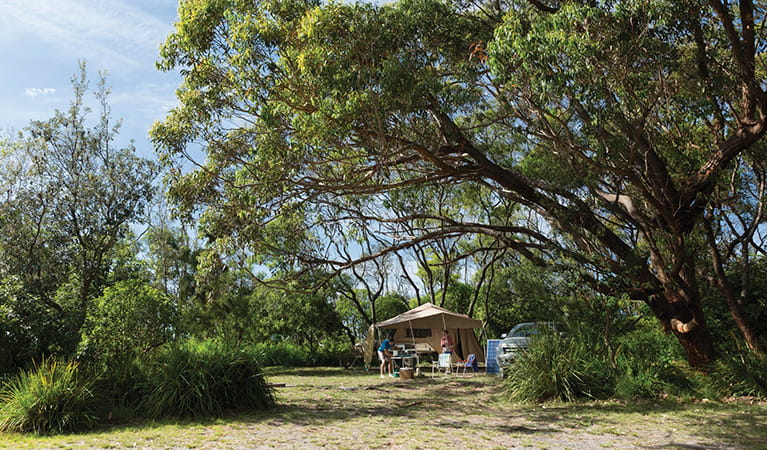 This large campground features four distinct camping areas, so bring your tent or camper trailer and take your pick of campsite setting: untamed surroundings just 50m from the beach, an open, grassy area shaded by tall coastal mahogany, or an elevated spot to the west of the beach.

There’s easy access to walking tracks at Aragunnu campground. Head to Aragunnu Beach and explore its own unusual stones – some of which are as tall as a child and you’ll find good fishing spots nearby, as well as two picnic areas. Be sure to take the Mimosa Rocks walk that takes you past one of the park’s Aboriginal sites, before leading on to a scenic lookout.

For the latest updates on fires, closures and other alerts in this area, see https://www.nationalparks.nsw.gov.au/camping-and-accommodation/campgrounds/aragunnu-campground/local-alerts

All the practical information you need to know about Aragunnu campground.

Check the weather before you set out as roads within the park can become boggy when it rains. Access road, picnic and camping areas at this site are not suitable for large vehicles including caravans, motorhomes and buses.

Parking is available at Aragunnu campground.

There are lots of great things waiting for you in Mimosa Rocks National Park. Here are some of the highlights.

Head to one of the park's headlands for great whale watching – don't forget your binoculars for up close views.

A great time for a family camping holiday by the beach, try Aragunnu campground or Gillards campground .

Keep your eyes on the parks winter-flowering plants, like spotted gums, mugga ironbark and coastal banksia for honeaters and lorikeets.

The campground has wood barbecues, however there are gas barbecues in nearby picnic areas.

There are many patrolled beaches nearby, please see Surf Life Saving Australia.

This area is fully wheelchair-accessible:

With its forests, lush pastures and a coastline sculpted into a succession of wonders by the sea, the Sapphire Coast is a perfect holiday destination at any time of the year. Set in a valley at the junction of the Bega and Brogo rivers and surrounded by rich dairy country, Bega is a handsome, historic town that's the rural centre of the Sapphire Coast and gateway to the lush Bega Valley. Visit the Bega Cheese Heritage Centre, housed in a faithful reproduction of the original, tells the story of cheese-making production in the area.

Bermagui is a colourful port, famous for its deep-sea fishing. It's on the estuary of the Bermagui River, close to national parks.

Tathra is a small coastal township clustered around a historic sea wharf, a popular fishing platform and the only one of its kind remaining on the east coast of Australia.

Aragunnu campground is in Mimosa Rocks National Park. Here are just some of the reasons why this park is special: 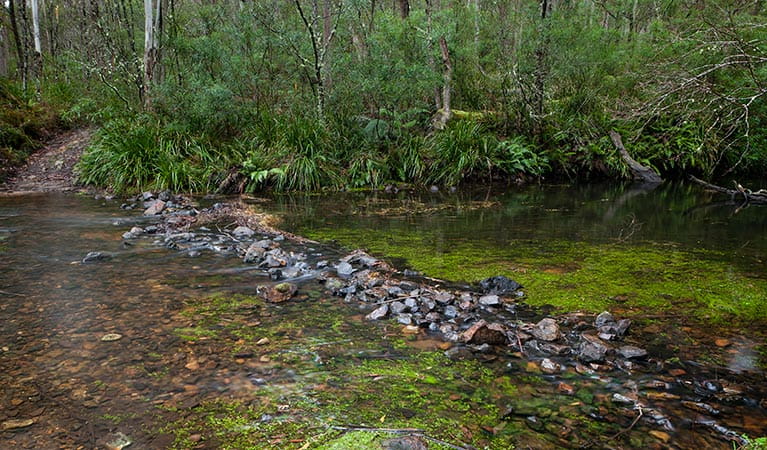 Mimosa Rocks National Park lies within the traditional Country of the Yuin people who have inhabited the region for thousands of years, climbing these headlands, swimming in the rivers and lakes, crossing the sand dunes and walking the beaches. The plants and animals within the park were a source of food, medicine and shelter for the Yuin people and the park's landscape is strongly connected to Dreaming stories. Be sure to take the Mimosa Rocks walk for an insight into the Aboriginal heritage within the park. 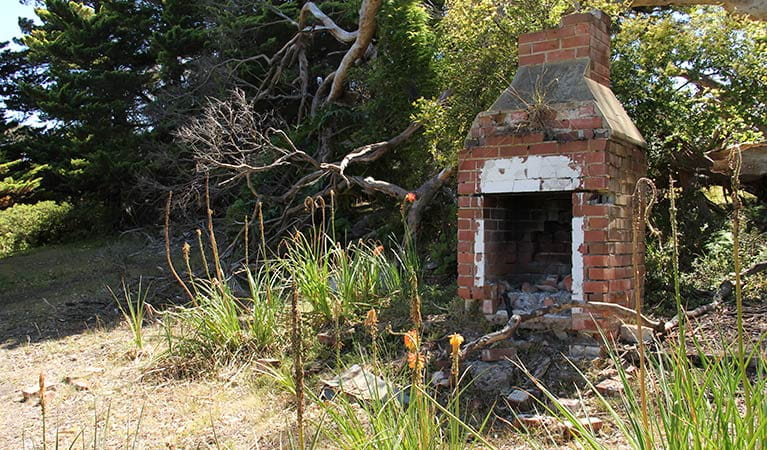 White settlers arrived in the Bega Valley in the 1830s, attracted by its grazing and farming potential, with Bega township being established in 1851. In its earliest years the town traders used Moon Bay as a regional port shipping Timber and sheep products from its sheltered waters. You can still see a log-slide and mooring ring from bygone days, or take a walk to 'Riverview' in the park's south-east, the remains of these historic premises have important associations with the 19th century timber and coastal shipping industries.

When you’re driving from the south and about to cross the Bega River, you are sure to notice the knife edge boundary of spotted gum, with an understorey of burrawang palms; characteristic vegetation of Mimosa Rocks National Park. When exploring the dunes and cliffs of the park you’ll see coastal banksia, coast wattle and drooping she-oak that can withstand winds and salty air. Check the gullies for the tubular flowers of the endangered chefs hat correa, so called because it’s a similar shape to a chef’s hat. 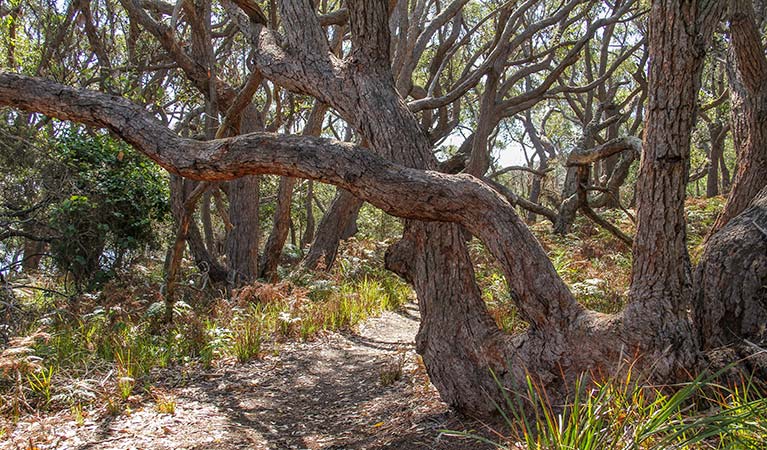 The park provides refuge for koalas, swamp wallabies and ringtail possums, to name a few. Of an evening at Aragunnu campground, you may not see yellow-bellied gliders flitting between trees, but you might be able to hear their distinctive cackling sound that cuts through the silence of the night. At Gillards campground you may well see a long-nosed potoroo. About the size of a rabbit, they look quite similar to a bandicoot, except that they hop in a similar way to a kangaroo. The potoroo is nocturnal, so you are most likely to see them in the evening. The park is an important stop for many migratory birds that nest along the park’s coastline. Look along the beaches and rock platforms – you may see threatened hooded plovers or pied oystercatchers. The bar-tailed godwit stops by briefly in summer during its migration from Alaska to New Zealand. It’s a well deserved stop off as the bar-tailed godwit makes the longest known non-stop flight of any bird and the longest journey without pausing to feed by any animal. Look for them around the park’s lakes and lagoons. 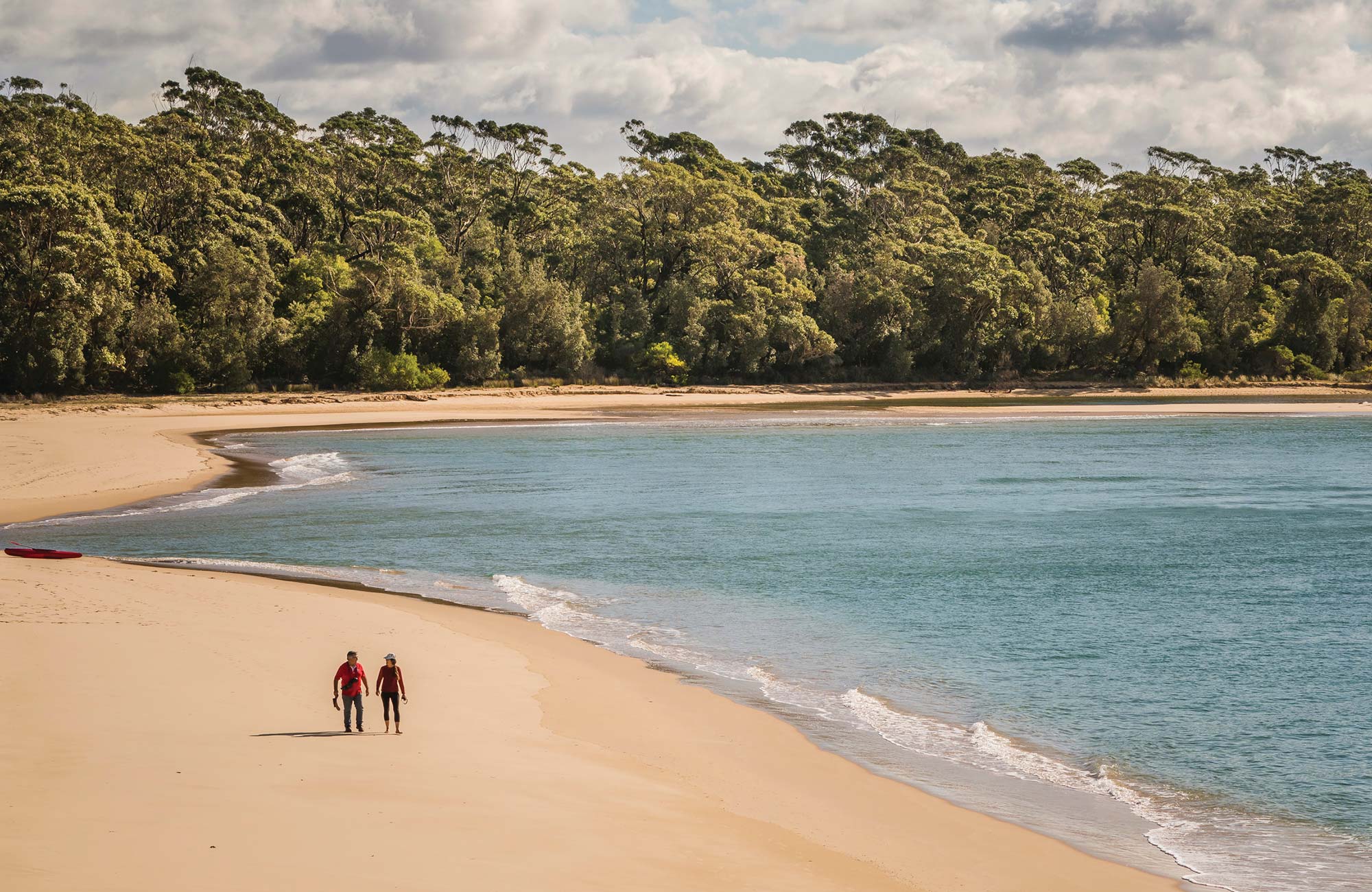