Only accessible by 4WD, remote Terrace Beach and Lennards Island is the perfect nature escape from the hustle of city life. Situated in beautiful Ben Boyd National Park, on the NSW Far South Coast near Eden, it’s a perfect spot for ‘off the beaten track’ adventurers. Windswept and wild, this beach offers superb birdwatching, fishing and diving.

Soak up the sweeping coastal views across Long Beach down to Haycock Point. You might see pied oystercatchers looking for tasty morsels along the beaches, or languid sea eagles cruising on the coastal breezes. It’s a perfect vantage point for whale watching during their annual migration.

A perfect spot for a beach picnic, while away a leisurely afternoon fishing or walking along the golden sands. If you’re keen to explore the underwater world, bring your scuba diving gear. 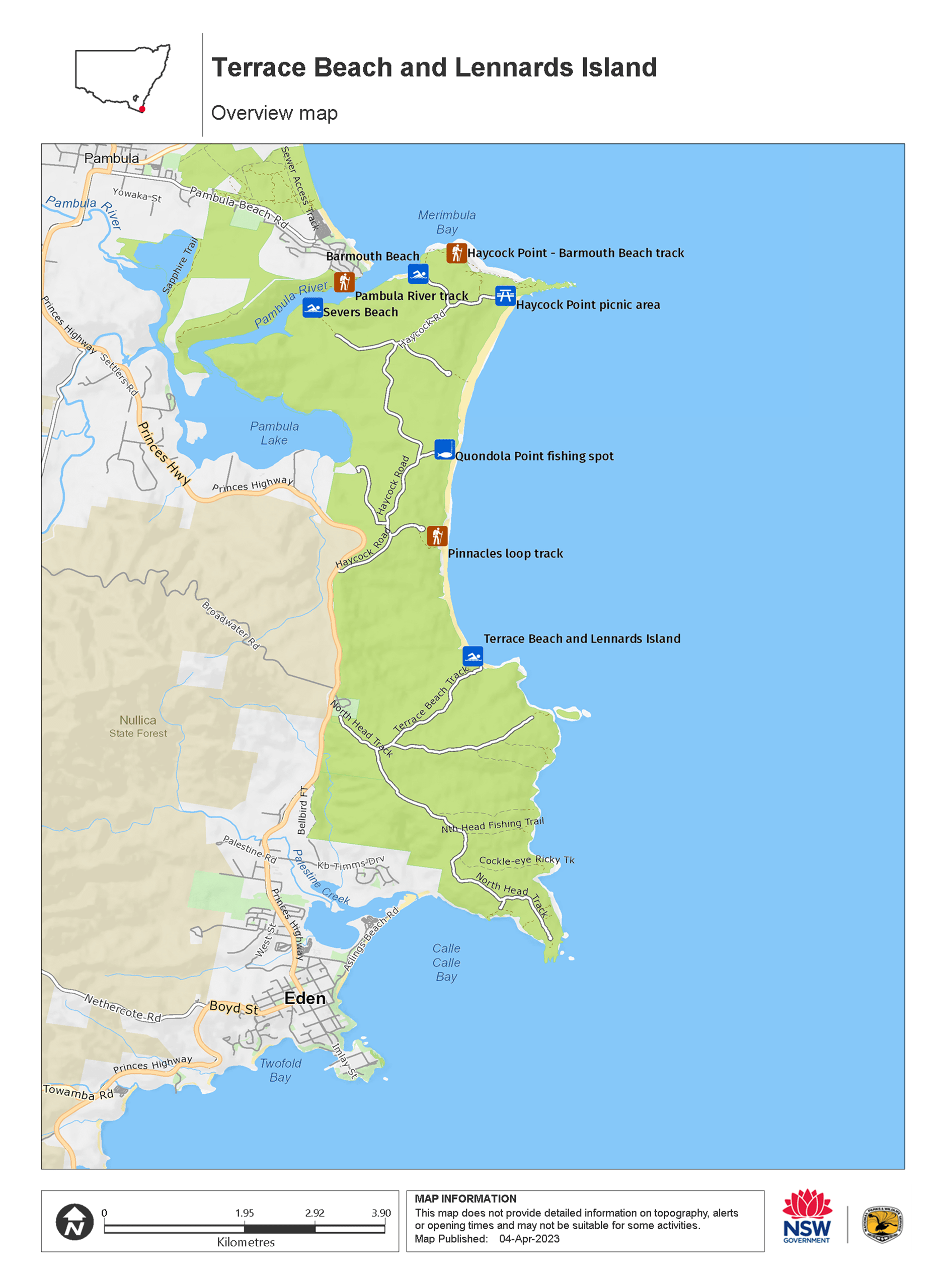 For the latest updates on fires, closures and other alerts in this area, see https://www.nationalparks.nsw.gov.au/things-to-do/swimming-spots/terrace-beach-and-lennards-island/local-alerts

All the practical information you need to know about Terrace Beach and Lennards Island.

Terrace Beach and Lennards Island is in Ben Boyd National Park. To get there:

Parking is available at Terrace Beach but it can be a busy place on the weekend, when parking might be limited.

There are lots of great things waiting for you in Ben Boyd National Park. Here are some of the highlights.

Visit Green Cape Lighthouse or Boyds Tower to spot whales migrating south to their Antarctic feeding grounds - you might even see females with young calves.

Plan a camping trip to Saltwater Creek - to enjoy the lagoons and beautiful surf beach.

Take the Light to Light walk when it's nice and cool and the banksias are in bloom.

There is 1 picnic table.

This unpatrolled beach can be treacherous at times.

Terrace Beach and Lennards Island is in Pambula-Haycock area. Here are just some of the reasons why this park is special:

The Yuin People are the Traditional Owners and Custodians of Ben Boyd National Park and they have a long and complex relationship with the coastal environment. Some of the best preserved mounded middens on the east coast of Australia are found in the park along the Pambula River. These middens contain the shells of oysters, mussels and sometimes the bones of sea and land mammals—collected by Aboriginal people from the rock platforms, reefs and estuaries along the park’s coastline.

The park’s stunning rock formations, inlets and headlands are the result of extensive geological folding. Most of Ben Boyd National Park lies on red, brown and green shales, sandstones, siltstones and quartzites. These were formed in the Devonian period around 360 million years ago, before dinosaurs roamed the earth. You can see these rock types exposed along the cliffs and headlands. The Devonian period is known as The Age of Fishes and internationally-significant fish fossils have been found in several places along the park’s coastline.