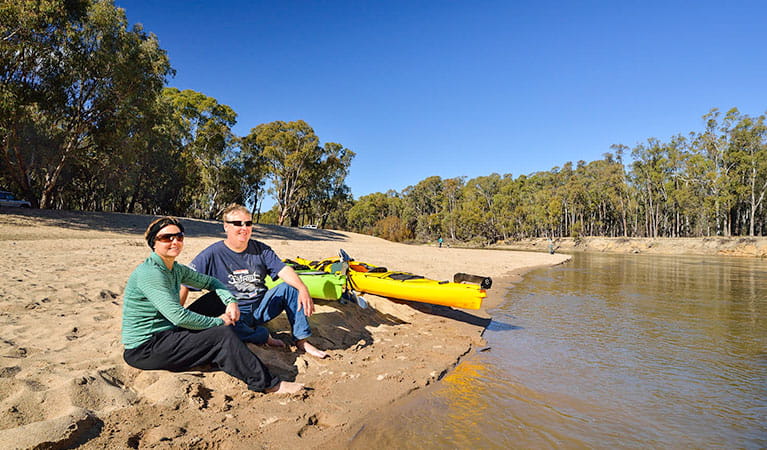 This sandy Murrumbidgee River haven, Middle Beach, is an ideal place to go canoeing, kayaking, fishing, swimming or picnicking. Secluded camping spots can be found nearby.

Middle Beach is a sandy Murrumbidgee River beach. It’s an easy place to spend a few hours and a wonderful spot to return to each day from your nearby bush campsite in the surrounding river red gum forest.

Launch a kayak or canoe from the beach and explore this iconic Australian waterway. Laze on the beach in the sun or shade and have a swim between chapters of that book you’ve been meaning to read for so long. Keen birdwatchers should keep binoculars handy to get a closer look at olive-backed oriole, corellas and yellow rosellas.

Spend the day fishing and you may catch trout or yellowbelly. If you happen to catch a Murray cod on the end of your line, be sure to release it – populations of this iconic fish are in decline. A forest trail also leads to the waterfront further downstream to more secluded fishing and camping spots.

Or, if you want to launch a boat, there’s a ramp upstream at Euroley Bridge. 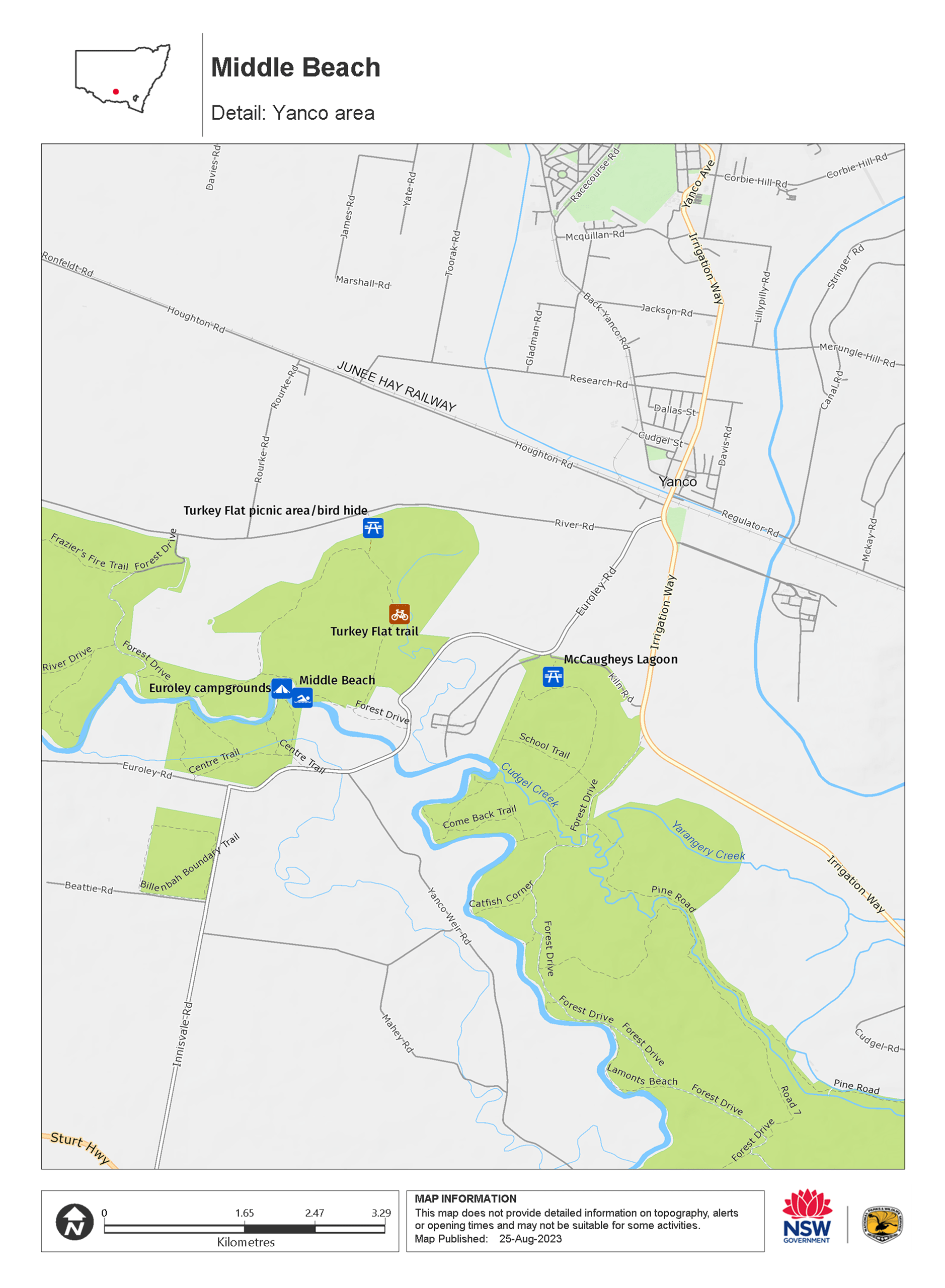 For the latest updates on fires, closures and other alerts in this area, see https://www.nationalparks.nsw.gov.au/things-to-do/swimming-spots/middle-beach/local-alerts

All the practical information you need to know about Middle Beach.

Middle Beach is in the MIA II precinct of Murrumbidgee Valley National Park. To get there:

Check the weather before you set out as the road to Middle Beach can become boggy when it rains.

Parking is available at Middle Beach, including several designated disabled spots. It can be a busy place on the weekend, so parking might be limited.

There are lots of great things waiting for you in Murrumbidgee Valley National Park. Here are some of the highlights.

Evenings can be balmy at this time of year, so it's still a great time to camp.

Picturesque morning mists are common at this time of year and birds and animals are most active.

This is Murray crayfish season, and a great time to head to the river.

Middle Beach is in Murrumbidgee Valley National Park. Here are just some of the reasons why this park is special: 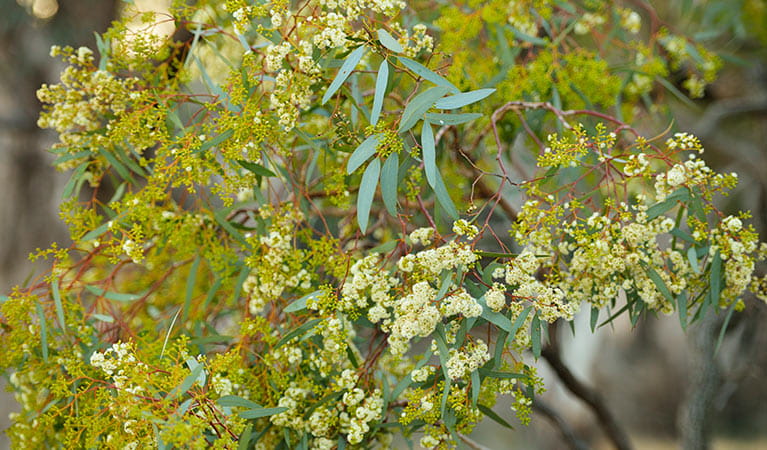 Murrumbidgee Valley National Park is synonymous with Riverina river redgum forests – an iconic Australian eucalypt which grows to awe-inspiring heights. With a deep red colour curving along rivers and channels, Riverina river red gum is of international significance. These special eucalypts provide a home to koalas, which you may spot in their branches. Bird watchers might catch a glimpse of white-bellied sea eagles, sacred kingfishers, and threatened superb parrots, amid the majestic trees. There are plenty of fishing opportunities available in the park too, with yellow belly, redfin and brim fish to catch in the area. Murrumbidgee Valley is also a sanctuary for reptiles and kangaroos.

Take me to the river 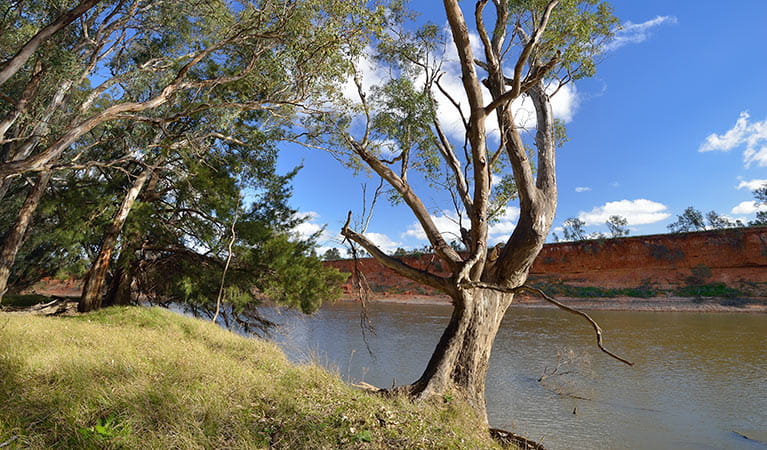 Murrumbidgee River flows in a westerly direction and is over 1,600km long. Murrumbidgee Valley national and regional parks access over 500km of river frontage at irrigation hubs of Narrandera, Yanco, Leeton, the plains of Maude and Hay, and the edge of the mallee at Balranald. River red gums benefit from times of flooding as it recharges the subsoil with water. The river supports river red gums forests, which in turn support the banks of the river with their root systems. Logged since the 1820s and managed as forests by the government since the early 1900s, in 2010 NSW National Parks and Wildlife Service protected 107,000ha of river red gums by creating new parks and reserves, which will now be enjoyed for generations to come. 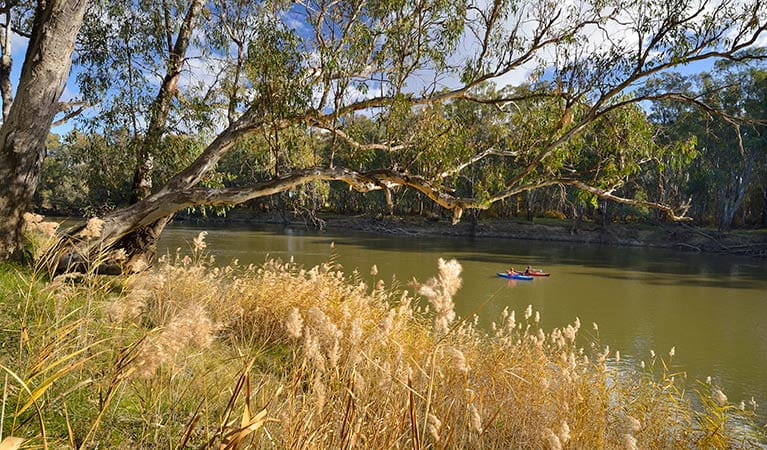 Europeans settled the area in the 1840s. By the early 1900s, private irrigation works were replaced by government projects to develop Murrumbidgee Irrigation Area (MIA). Eventually, MIA supplied water to an area of 182,000ha and enabled subdivision of grazing land into smaller units of mixed farming, horticulture, dairy and sheep. During the 1950s, Italian migrants to Australia were drawn to the area because of its similar climate and soil to Italy and became integral in the success of Riverina agriculture. 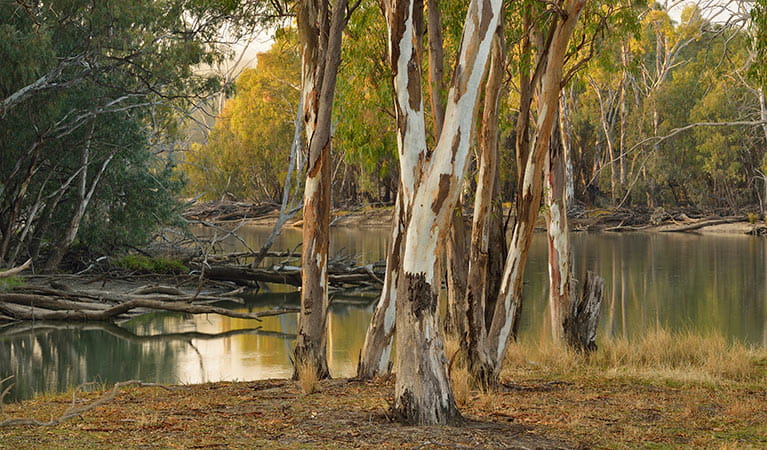 River red gums have been important to Wiradjuri people, the traditional land owners of Murrumbidgee Valley, for thousands of years. As well as being used for making canoes and shields, they also provide warmth, shelter and food. Some river red gums were large enough for individuals to sleep in, and light a small fire during the cold nights. Even today, Wiradjuri artists in Narrandera use river red gum to make boomerangs, coolamons and carved didgeridoos.