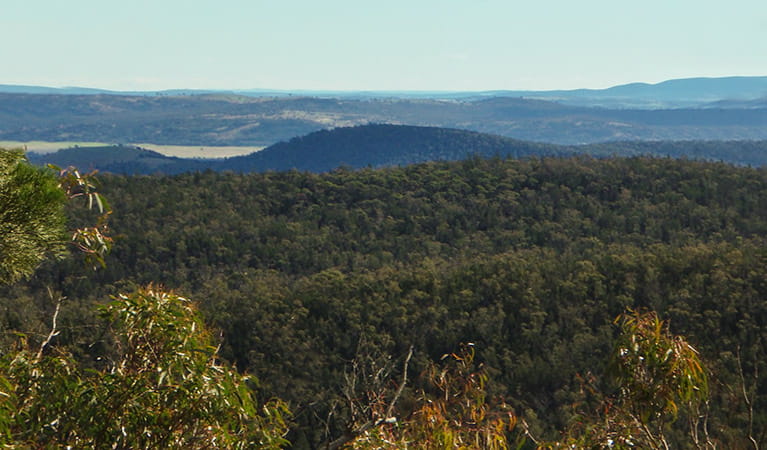 Conimbla National Park is a peaceful nature reserve that promises easy bushwalks, birdwatching and scenic views. It is located near Cowra, Grenfell and Gooloogong.

A short drive from Cowra and Grenfell, Conimbla National Park is a quiet, tranquil nature reserve where you can enjoy easy, peaceful bushwalks amid rugged hills and farming country.

Yambira mountain and its surrounding forested ranges rise nearly 500m above the plain, forming a 'bush island' amid the central west farmlands. Rock ledges and small waterfalls have formed along some of the creek-lines. There is a large diversity of orchids in the park, including the only known population of the midge orchid, while many flowering shrubs brighten the landscape in spring, like flax lily, gold dust wattle, seven dwarf’s grevillea, myrtles, hill indigo, bitter peas, and grass trees.

The park is particularly popular with keen birdwatchers, as over 150 species have been recorded here, including some interesting threatened species, such as the little eagle, glossy black-cockatoo, turquoise parrot and several species of honeyeaters and robins.

Mammals you may see here include eastern grey kangaroos, wallaroos, swamp wallabies, little red flying foxes, brush-tailed possums, and the threatened pygmy possum and squirrel glider. Kangaroos and wallabies are often seen throughout the day, but the possums and gliders are best seen at night.

With limited visitors to this huge, untapped natural place, you can sometimes find that you have the entire 7,965ha of park entirely to yourself.

For the latest updates on fires, closures and other alerts in this area, see https://www.nationalparks.nsw.gov.au/visit-a-park/parks/conimbla-national-park/local-alerts

All the practical information you need to know about Conimbla National Park. 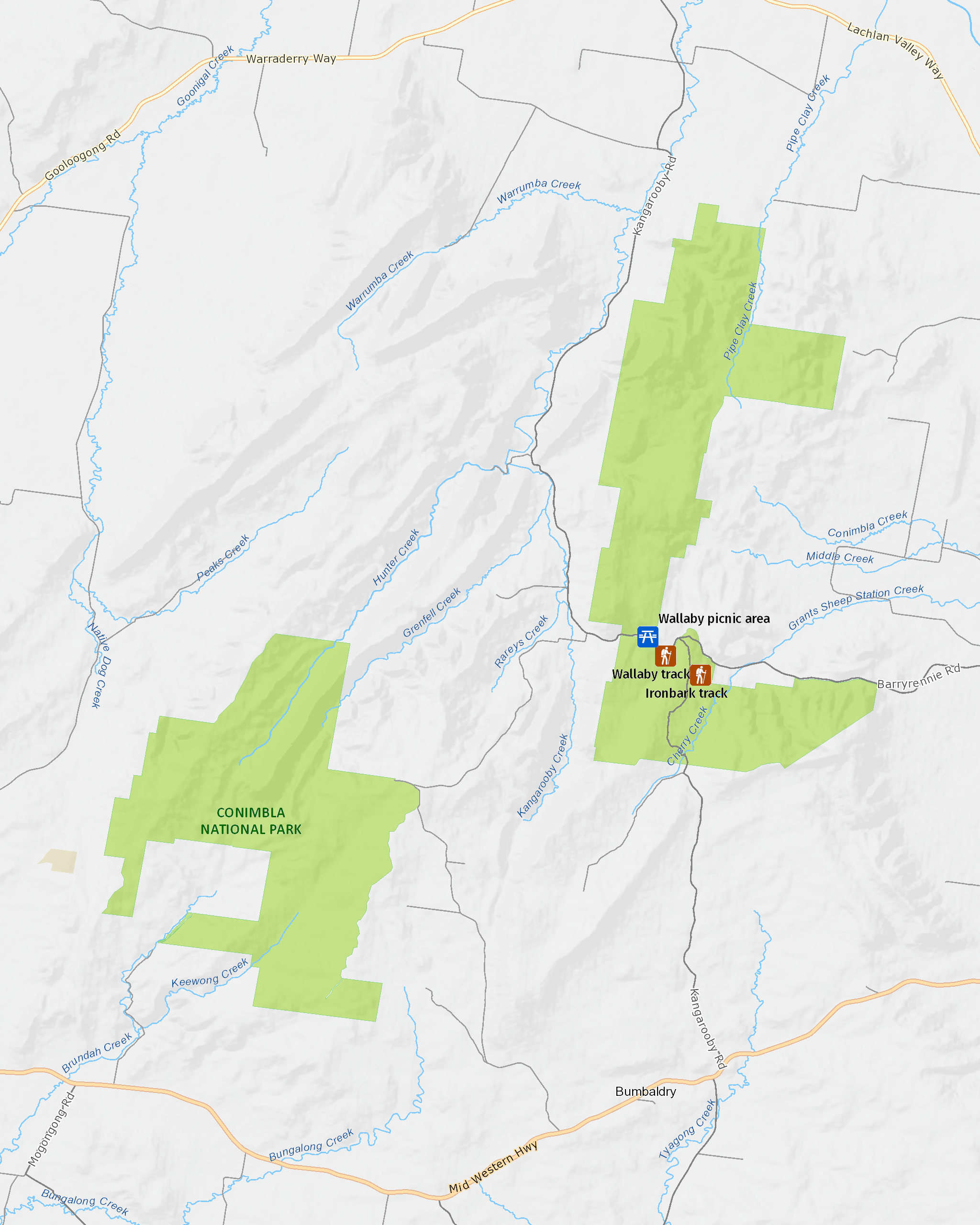 There are lots of great things waiting for you in Conimbla National Park. Here are some of the highlights.

Take advantage of the cooler weather and go for a more adventurous walk off the beaten track.

Check out the abundance of beautiful blooming wildflowers, particularly the park's distinctive range of orchids.

A good time to enjoy the wild nightlife in Conimbla with some spotlighting along Wallaby walking track.

Cowra is gaining a reputation as a wine-producing region and source of specialty products. You'll find plenty of cellar doors where you can sample award-winning local wines from golden chardonnay to soft, ripe reds.

The historic goldmining town of Grenfell is the birthplace of poet Henry Lawson, who was born on 17 June, 1867.  Bushranger Ben Hall was also born nearby. Hall and his gang rampaged through the area from late 1863 until his death in a hail of bullets in May 1865.Visit the Grenfell Historical Museum to learn about Grenfell and its famous and (infamous) sons.

Conimbla National Park is a special place. Here are just some of the reasons why:

A sanctuary for native plants and animals 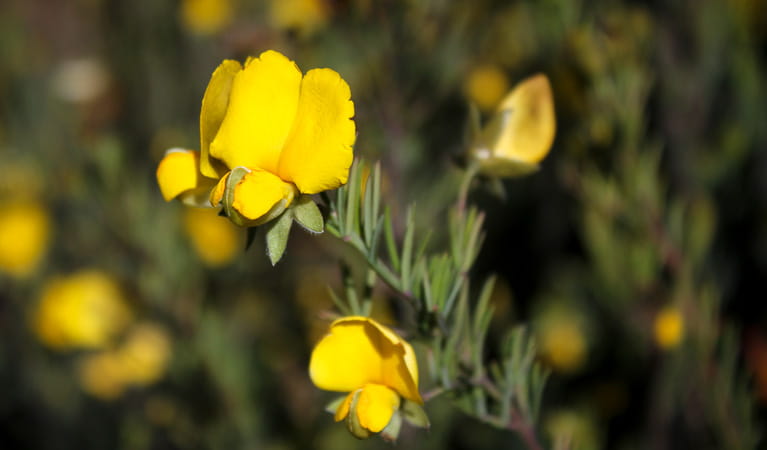 Conimbla National Park is a large patch of vegetation surrounded by rugged farming country. The plants and animals here have had little disturbance in the last 40 years, making it an important reminder of vegetation native to the ranges and hills of central west NSW. Conimbla is particularly known for its diverse array of orchids, including the only known population of the beautiful and unusual midge orchid. In spring, the ground is covered with masses of beautiful wildflowers. Conimbla is also an important refuge for many birds, as it is the largest remnant of native vegetation in the local area and has a diversity of foliage, from open forest to heathland. A number of threatened species that have been recorded in the park have not been observed elsewhere in the surrounding farming country. With low visitation numbers, the park is incredibly peaceful, making it ideal for bird watching. 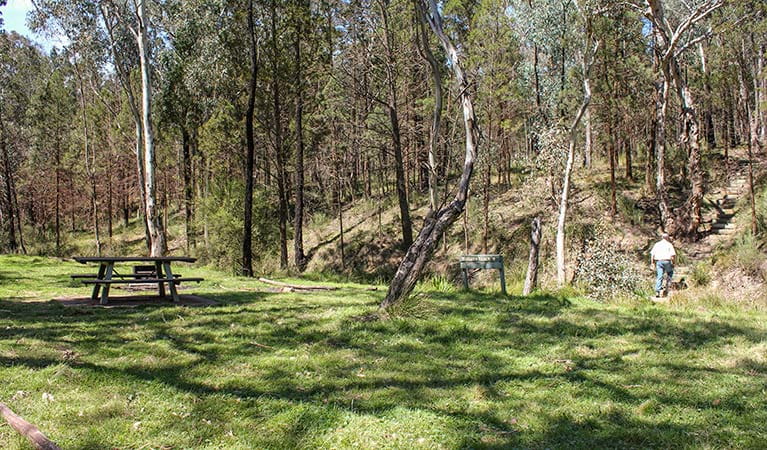 Conimbla offers a quiet refuge for people as well. It's great for bird watching, bushwalking and heading off the beaten track to discover some of the park's hidden beauties. Wallaby picnic area is also an easily-accessed, tranquil spot to enjoy a picnic with family and friends.

Conimbla National Park has management strategies in place to protect and conserve the values of this park. Visit the OEH website for detailed park and fire management documents. 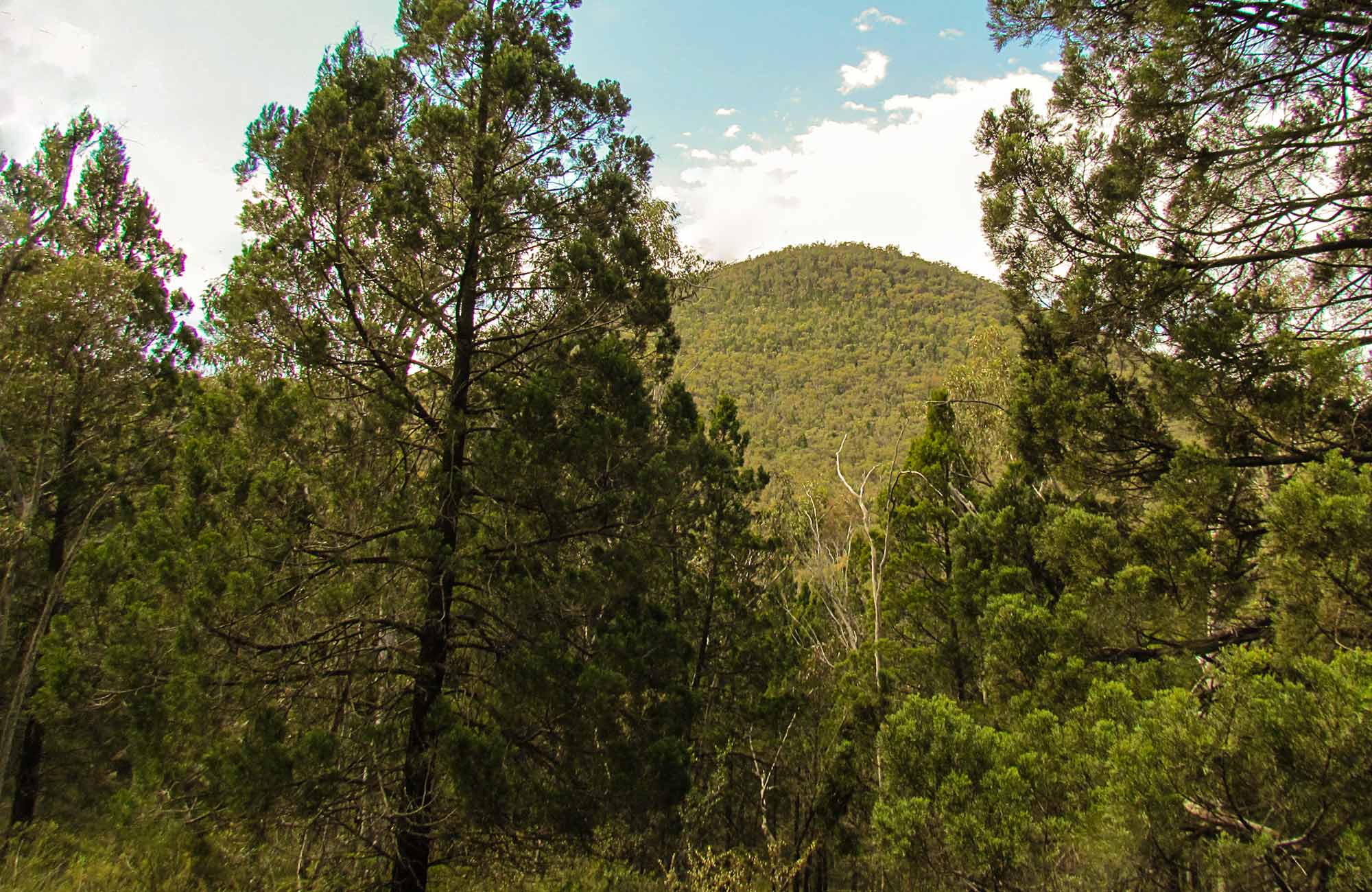