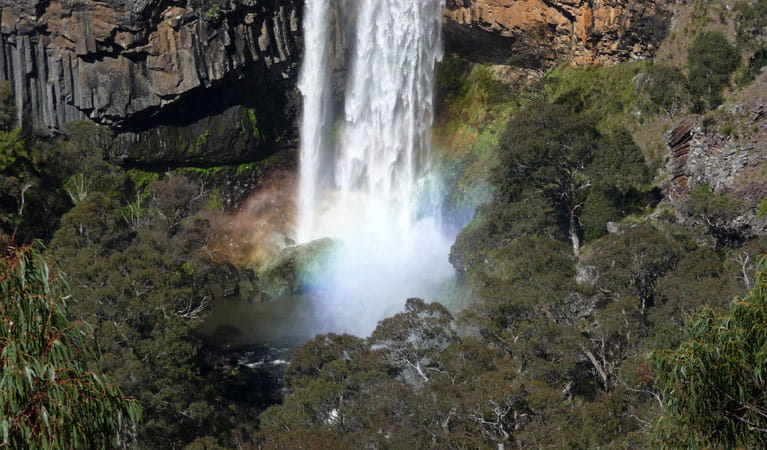 A great stop-off between the coast and Armidale along Waterfall Way, Ebor Falls offers spectacular waterfall views, scenic lookouts and a picnic area.

Watch the Guy Fawkes River plunging 100m over two waterfalls at Ebor Falls. Three lookout platforms along the edge of the gorge – upper falls, lower falls and valley view — give spectacular views out into the rugged gorge country.

A walking track links the upper falls and lower falls lookout platforms via the escarpment edge and is an easy walk that’s suitable for children. You can start out at either end and return via the road.

Golden everlasting daisies bloom around the upper falls in the warmer months and rare ground orchids flower in the late spring and summer. If you’re lucky, you may even spot a wedge-tailed eagle soaring above you as you picnic in the grassy woodlands area next to the falls.

For the latest updates on fires, closures and other alerts in this area, see https://www.nationalparks.nsw.gov.au/things-to-do/lookouts/ebor-falls/local-alerts

All the practical information you need to know about Ebor Falls.

Ebor Falls is in Guy Fawkes River National Park. To get there:

Parking is available at Ebor Falls.

There are lots of great things waiting for you in Guy Fawkes River National Park. Here are some of the highlights.

Great camping weather when the days start cooling off, yet the water in the river is still warm.

Look out for native wildflowers around Ebor Falls, including everlasting daisies, native violets and small-fruited hakea.

Paddle in the creek at Chaelundi campground or swim, canoe or fish on Boyd River at Dalmorton.

Waterfalls are beautiful destinations but please be safe when visiting these natural wonders. Read these waterfall safety tips before exploring waterfalls on your next walk.

Assistance may be required to access this area. Wheelchair-accessible toilets are available.

Rock climbing is permitted only between the upper and lower falls viewing platforms. The code of conduct on the information display should be followed.

Ebor Falls is in Guy Fawkes River National Park. Here are just some of the reasons why this park is special:

Major Edward Parke named Guy Fawkes River after camping nearby on Guy Fawkes Day, November 5, 1845. Gold was discovered in the late 1800s at Ballards Flat and Dalmorton, with the latter once supporting a town of 3,000 people during a short gold rush. A couple of building ruins remain today and old stockmen huts and yards are still present throughout the valleys. 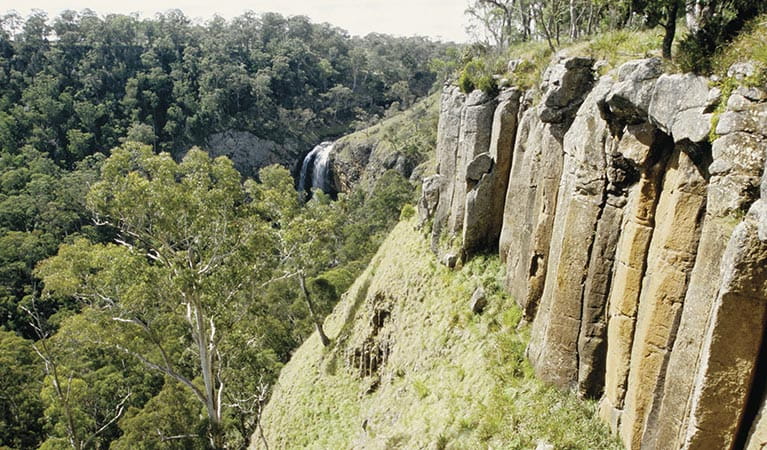 Archaeological sites suggest that Aboriginal people have occupied these valleys for over 10,000 years. The Guy Fawkes and Boyd rivers once served as important traffic and trade routes linking the tablelands to the coast. Ebor Falls was traditionally named 'Martiam', which means 'Great Falls' in Gumbaynggir language. 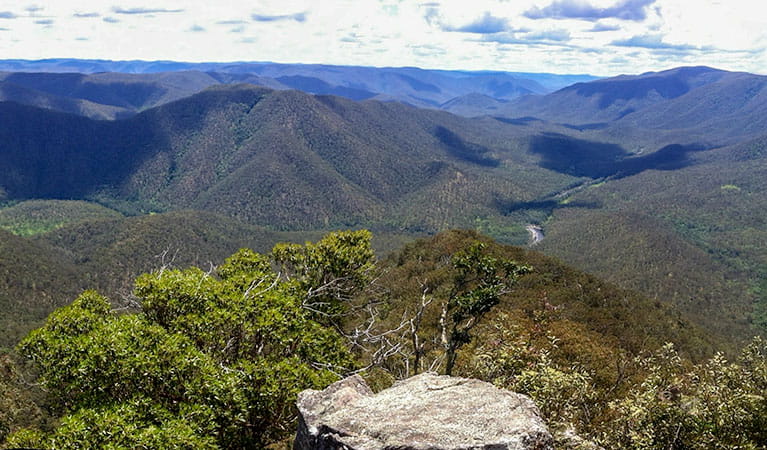 The north-south line of the Guy Fawkes River cuts through the Demon fault line, a 240-million-year-old crack in the landscape. In the south of the park the Ebor volcano spewed lava across the landscape. This created the Ebor Falls, with their unusual organ pipe-like rock formations. 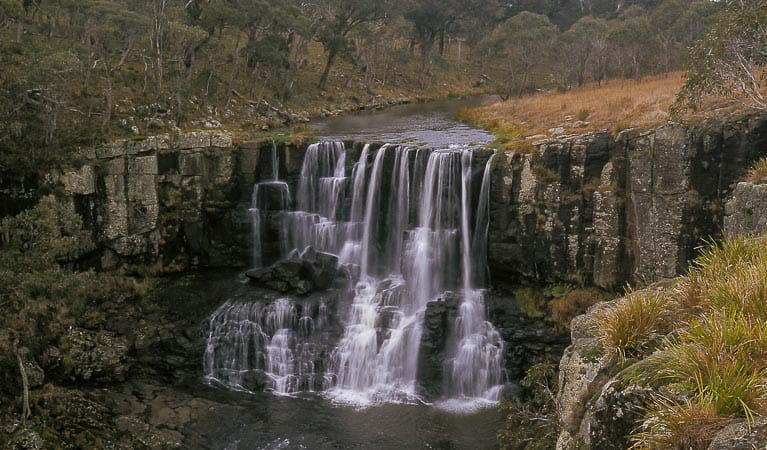 The park is an incredible biodiversity hotspot. There are over 40 different plant communities and about 1000 plant species in the park, along with 28 threatened plant species, 24 threatened animal species, and significant areas of old growth forest. The endangered brush-tailed rock-wallaby can be seen in the rocky areas of the park, while glossy black cockatoos are often spotted throughout the park. The park is also one of the few remaining areas in Australia where purebred dingoes can still be found. The park is a conservation site for one of the most significant areas of wilderness in northern NSW, extending over 84,000ha of the 107,000ha park. This preserves the biodiversity of the park, allowing its natural ecosystems to be kept free from excessive human impact. 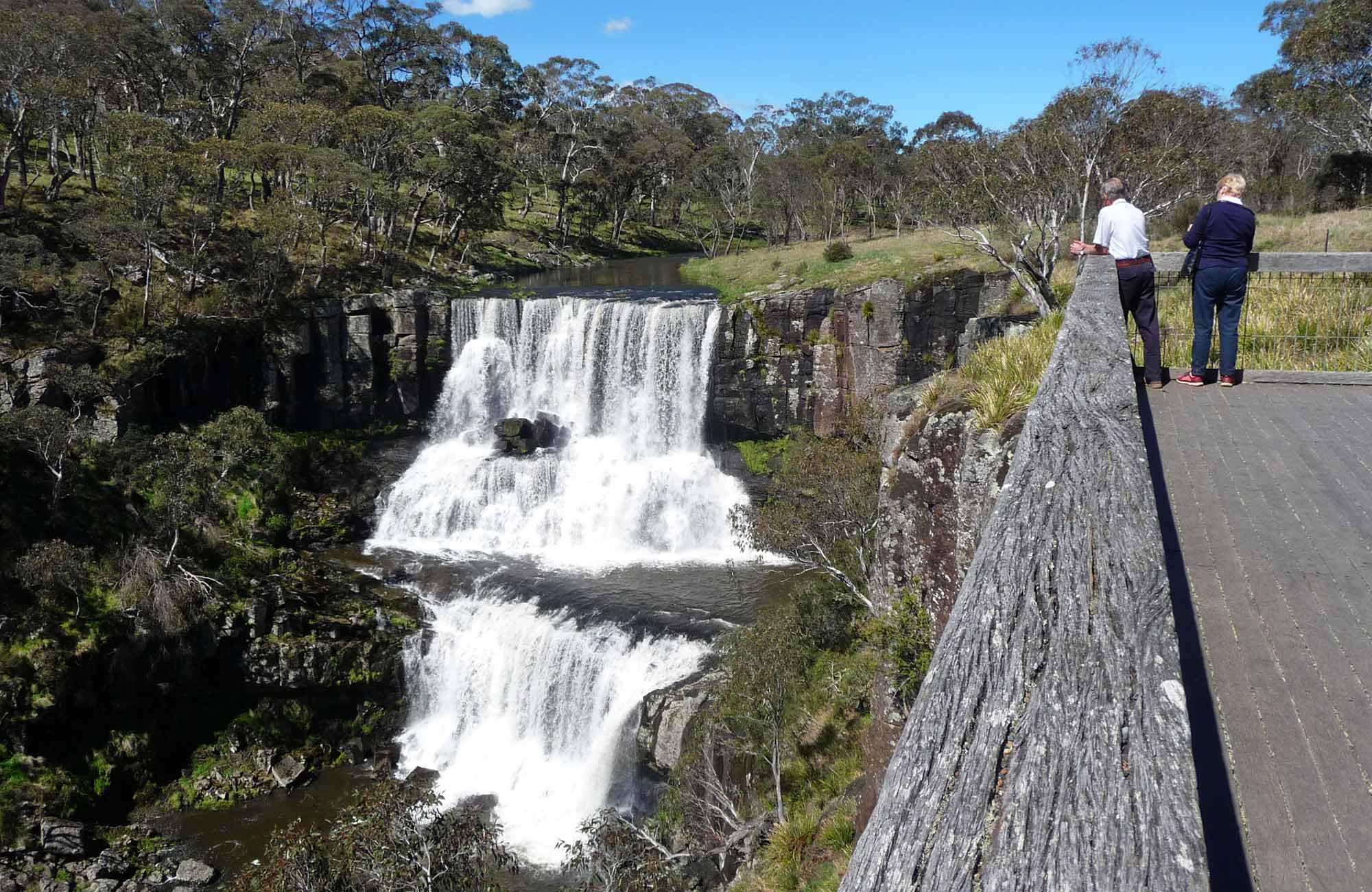