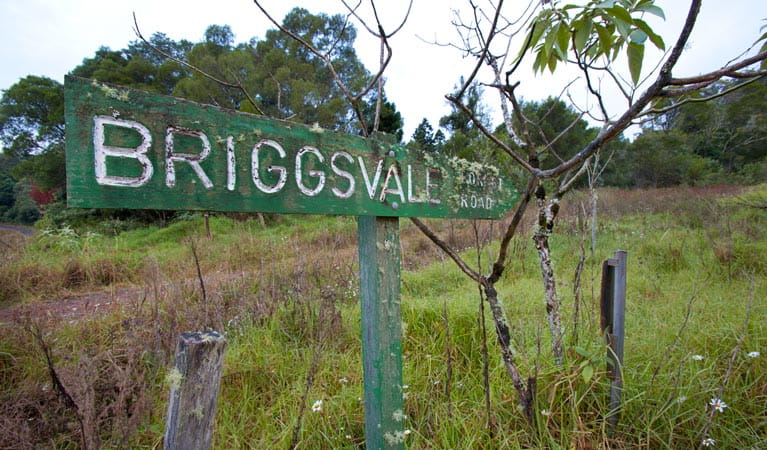 Enjoy a scenic cycling route through the rainforest on Cascade mountain bike trail, only an hours' drive from Coffs Harbour, and spot lyrebirds, reptiles and other wildlife along the way.

Cascade mountain bike trail is always open but may have to close at times due to poor weather or fire danger.

The tiny hamlet of Briggsvale is the starting point for Cascade mountain bike trail – an easy, undulating cycling route along a gravel path that takes riders to the heart of Cascade National Park. All around, you’ll see the diversity of the landscape with lush rainforest interspersed with more open patches of eucalyptus trees.

The cycling trail travels east along Briggsvale Road, one of the most likely parts of the parks for visitors to see and hear lyrebirds. You’ll need to be as quiet as possible though, because these beautiful birds are notoriously shy. Aside from birdwatching opportunities, there’s also a chance you might be cycling past some of the resident reptiles, including carpet pythons, who like to warm themselves on the sun-lit paths.

When you reach the intersection of Carters trail, turn around and head back to Briggsvale. This is a great mountain bike ride to take at any time of year, but remember to layer your clothing during winter because the region is high above sea level and can get quite cool.

For the latest updates on fires, closures and other alerts in this area, see https://www.nationalparks.nsw.gov.au/things-to-do/cycling-trails/cascade-mountain-bike-trail/local-alerts

All the practical information you need to know about Cascade mountain bike trail.

Cascade mountain bike trail is in eastern precinct of Cascade National Park. To get there:

There is no formal parking area at the beginning of the trail, but there are a few parking options within a few hundred metres.

There are lots of great things waiting for you in Cascade National Park. Here are some of the highlights.

Conditions are dry and perfect for mountain biking through the forests.

The wettest time of the year and a great opportunity to see the rainforest at its best, with fungi and fruits on show.

It's cool, but rug up for walks through the misty rainforest with hardly anyone else around.

This trail is in a remote location, so please ensure you’re well-prepared, bring appropriate clothing and equipment and advise a family member or friend of your travel plans.

Bellingen is a laid-back, tree-lined town with a New Age vibe. It's set in a luxuriant valley beside the Bellinger River.

Coffs Harbour is a coastal city on the North Coast, packed with things to do. It's surrounded by lush forests and national parks.

Dorrigo is a serene country town and the gateway to Dorrigo National Park. Its close to the edge of the escarpment above the Bellingen Valley.

Cascade mountain bike trail is in Cascade National Park. Here are just some of the reasons why this park is special:

A natural palette of colours 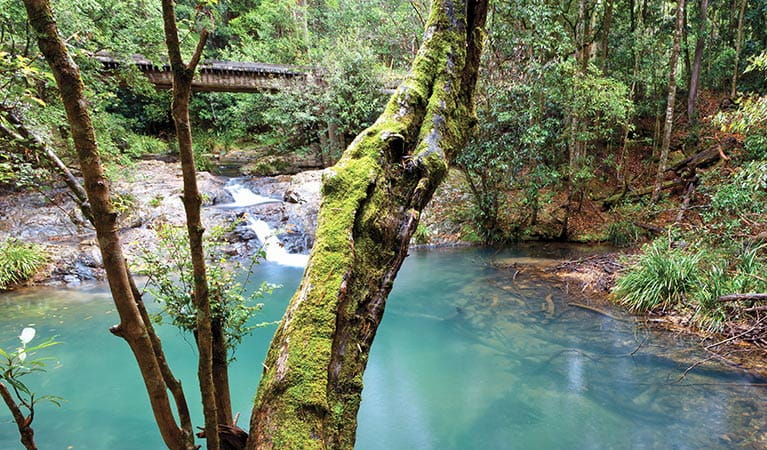 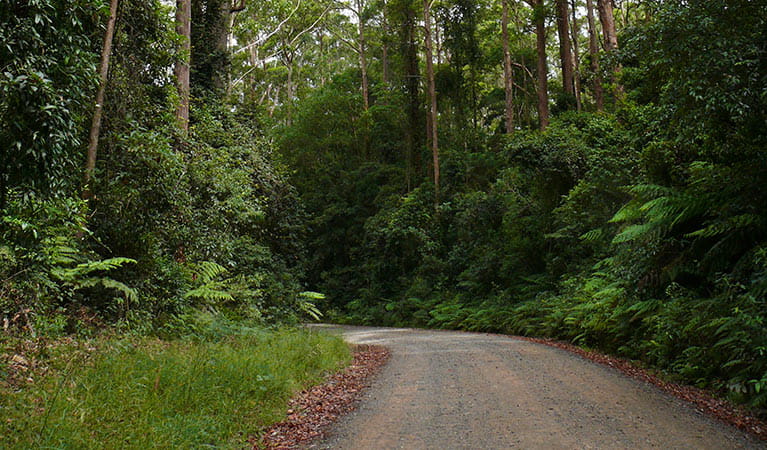 At the beginning of the 20th century, all over Dorrigo Plateau, the land was being opened up for dairy farming and cropping. Soon after, red cedar and hoop pine was targeted by loggers. A rail line was opened in 1924 to Glenreagh, and a network of tramlines carried timber from the forests to the mills at Cascade. Although logging no longer takes place here, the four rail lines and logging relics can be seen in Cascade National Park and nearby Nymboi-Binderay and Dorrigo national parks, in particular, around Cascade village and along Moonpar Forest drive.

Get active, or simply relax 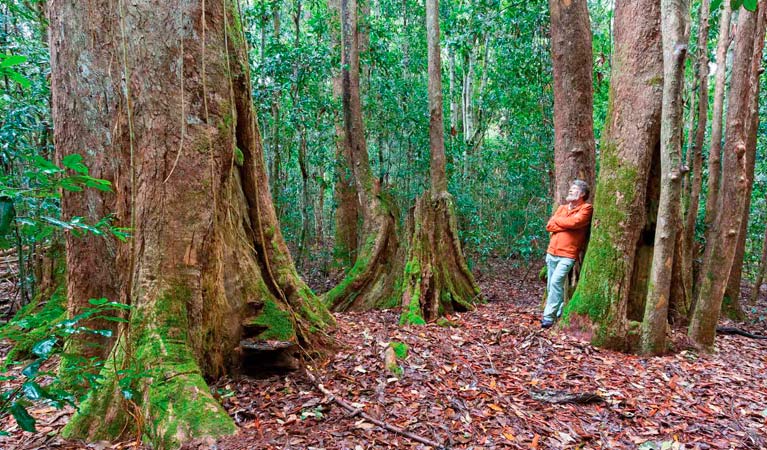 For those who like mountain biking, get yourself to Cascade ride. If walking is more your style, take a walk beneath the ancient trees on either Box Ridge or Mobong tracks. There's also a driving route that traverses both Cascade and the southern reaches of Nymboi-Binderay national parks. And be sure to bring your binoculars for birdwatching, and a picnic for when you're ready to relax. There's a full range of adventures, from the gentle to the more active, in Cascade National Park. 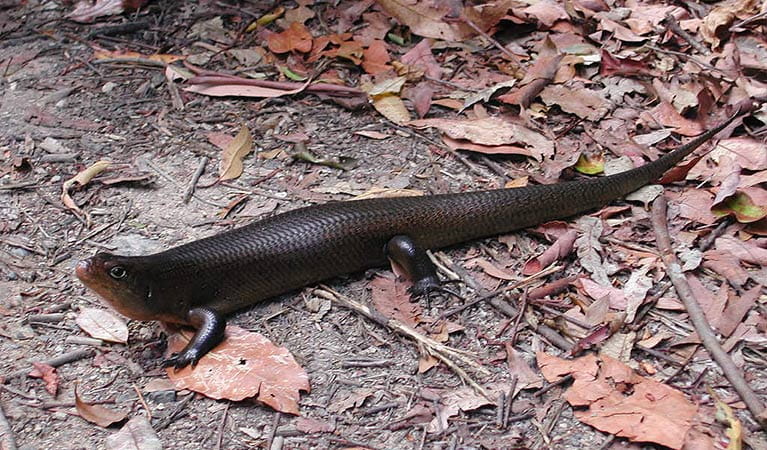 The rainforest in Cascade is busy with birds and animals, both day and night. During daylight hours, you may see lyrebirds, brush turkeys, and bowerbirds to name a few. The brightly feathered wompoo fruit dove, with its green belly blends, camouflages itself within the forest canopy. Wallabies can be seen early and late in the day. And rare species including sphagnum and pouched frogs, spotted-tailed quolls and red-legged pademelons also call Cascade National Park home. 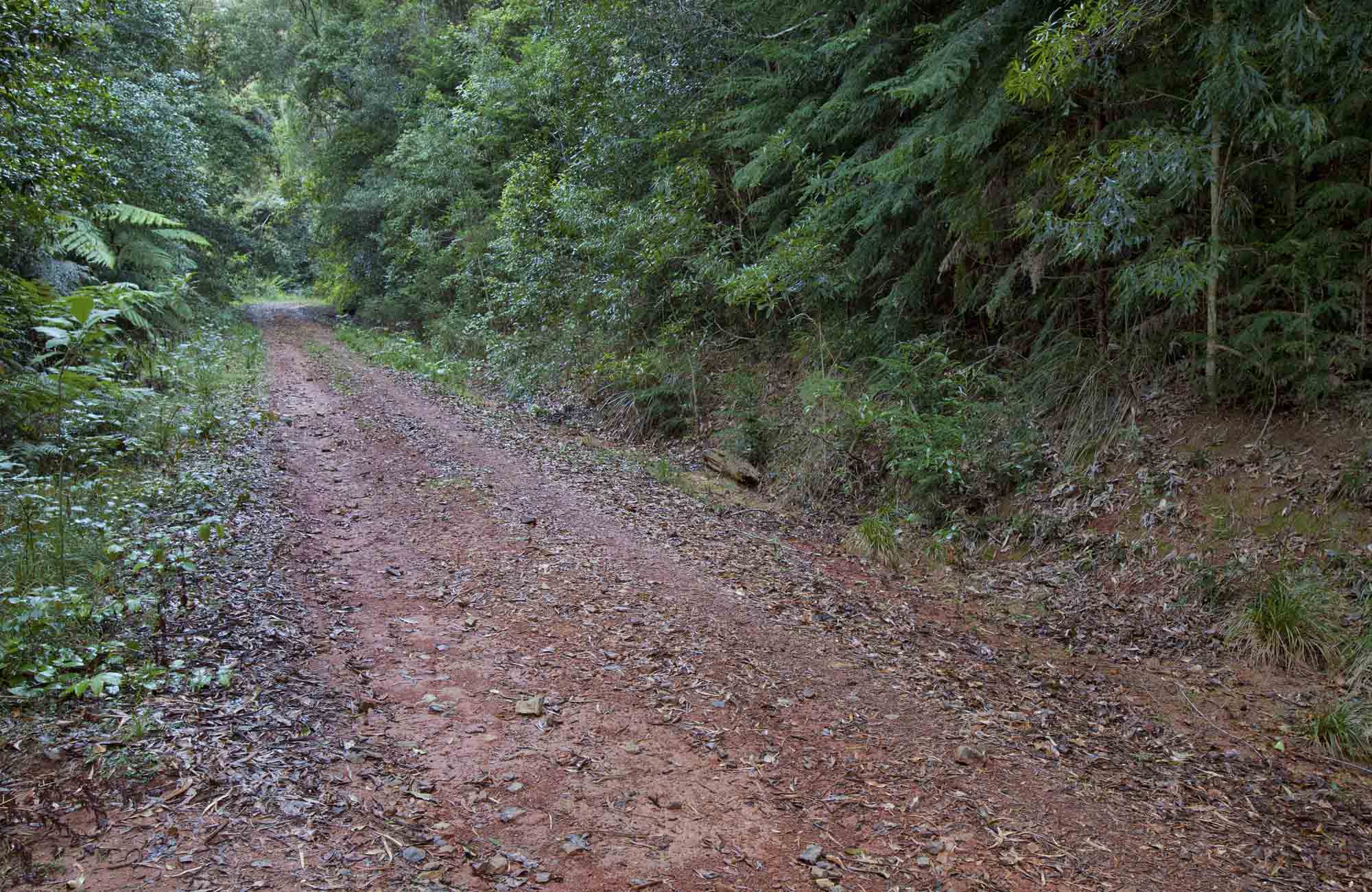