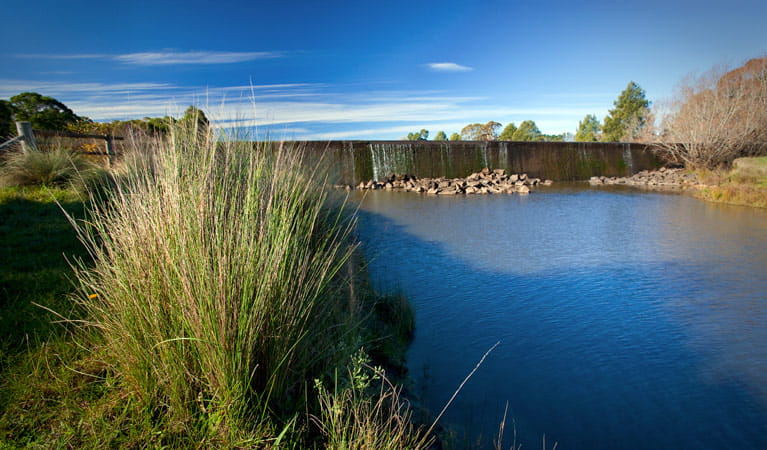 Cecil Hoskins Nature Reserve, in the NSW Southern Highlands, is a great place for walking, picnicking, birdwatching and enjoying the tranquillity of this wetland area.

A Southern Highlands wetland sounds unlikely, but it does exist. When Bong Bong weir was constructed in the 1920s to supply water to Moss Vale, a lagoon and swamp area formed at that part of Wingecarribee River. Only 12 years later it was declared a wildlife sanctuary. Now, over 90 species of birds, a third of which are waterbirds, have made it their temporary or permanent home.

Whether you’re keen on birdwatching or just looking for a peaceful place to enjoy walking and a quiet picnic, Cecil Hoskins Nature Reserve awaits you.

The land was originally part of 1,000ac granted in 1819 to Charles Throsby in recognition of his exploration of a route from the Southern Highlands to the Bathurst district. This area is also where Bong Bong village, the first settlement in the Southern Highlands, once stood. Although the village no longer exists, you can view historic Throsby Park from the reserve, where colonial buildings remain intact.

For the latest updates on fires, closures and other alerts in this area, see https://www.nationalparks.nsw.gov.au/visit-a-park/parks/cecil-hoskins-nature-reserve/local-alerts

All the practical information you need to know about Cecil Hoskins Nature Reserve.

There are lots of great things waiting for you in Cecil Hoskins Nature Reserve. Here are some of the highlights.

When the weather is milder, hike from the reserve to Bong Bong.

Bring your binoculars for a spot of birdwatching and look for migratory bird species that stop over to feed and rest in the reserve.

Enjoy a summer evening picnic and listen to birdcalls. By the time the sun goes down, they'll be in competition with the frogs.

Moss Vale is the rural centre of the Southern Highlands, with its regional livestock saleyards, farmers market and agricultural show. The meandering tree-lined main street and lush gardens make it one of the most picturesque towns in the region.

Spring is tulip time while summer has fragrant roses and autumn, flowering bulbs. Bowral Tulip Festival runs from the end of September until early October; the Autumn Garden Festival is held in May.

Nowra is a historic city and the commercial heart of the Shoalhaven. It's on the Shoalhaven River close to beaches and national parks.

Cecil Hoskins Nature Reserve is a special place. Here are just some of the reasons why:

Who was Cecil Hoskins? 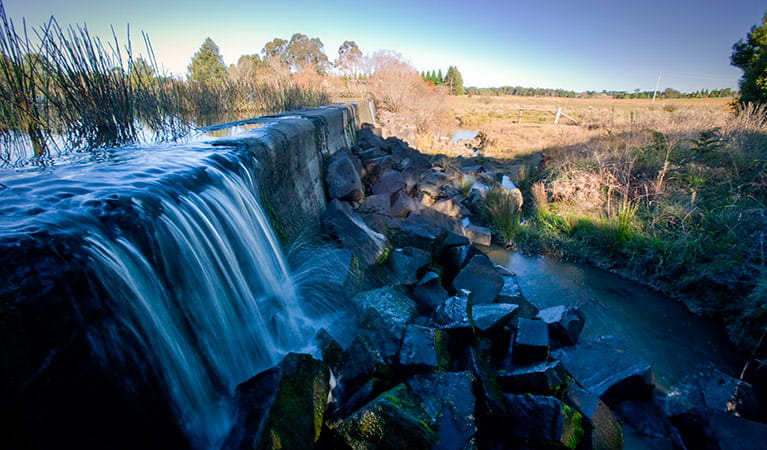 When the reserve was gazetted in 1975, it was named after Sir Cecil Hoskins. This man was a local resident for 40 years who not only had a keen interest in creating parks and gardens, but also contributed to the purchase of the land for the reserve. 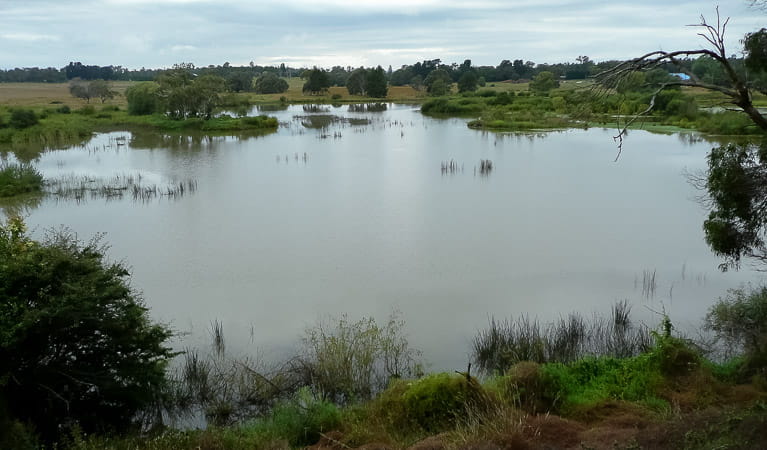 Over 90 bird species inhabit the reserve and around one third of these, including pacific black ducks, black swans, dusky moorhens and grey teals, are waterbirds that are dependent on the lagoon. So if you're keen on bird watching, be sure to bring your binoculars along. Platypus and kangaroos also make their homes in and around the lagoon. The reserve also supports stands of Paddys River box, native to the Moss Vale district and south of Jenolan, as well as snow gum banksia and a range of other native species. The lagoon itself is deep enough for large aquatic plants to thrive, such as tall spikerush, ribbonweed, yellow bladderwort and water milfoil. Other aquatic species include water snowflake, starwort, water primrose, river buttercup and nardoo.

The weir and the wherefore 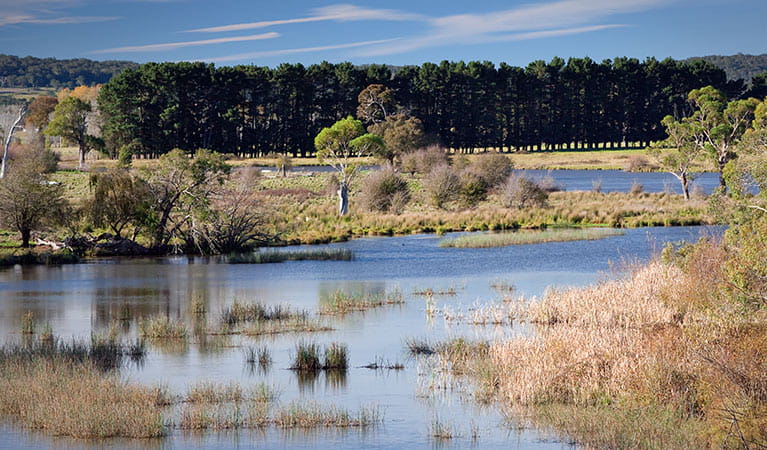 Bong Bong weir was built in the 1920s to create a water supply for Moss Vale. The lagoon and swamp areas, which developed as a result of this weir, were declared a wildlife sanctuary in 1932. During the 1965-8 drought, Wingecarribee Council considered destroying the weir to allow water to be released for Berrima Cement Works, situated downstream. This proposal was so strongly opposed by the local community, however, that the idea was abandoned. The reserve supports stands of Paddys River box, native to the Moss Vale district and south of Jenolan, as well as snow gum banksia and a range of other native species. The lagoon itself is deep enough for large aquatic plants to thrive, such as tall spikerush, ribbonweed, yellow bladderwort and water milfoil. Other aquatic species include water snowflake, starwort, water primrose, river buttercup and nardoo.

The reserve lies within the traditional land of the Bong Bong people. Cultural, linguistic and spiritual knowledge associated with this area continues to be passed on today. NPWS works in collaboration with local Aboriginal communities to protect this rich heritage.

Cecil Hoskins Nature Reserve has management strategies in place to protect and conserve the values of this park. Visit the OEH website for detailed park and fire management documents. 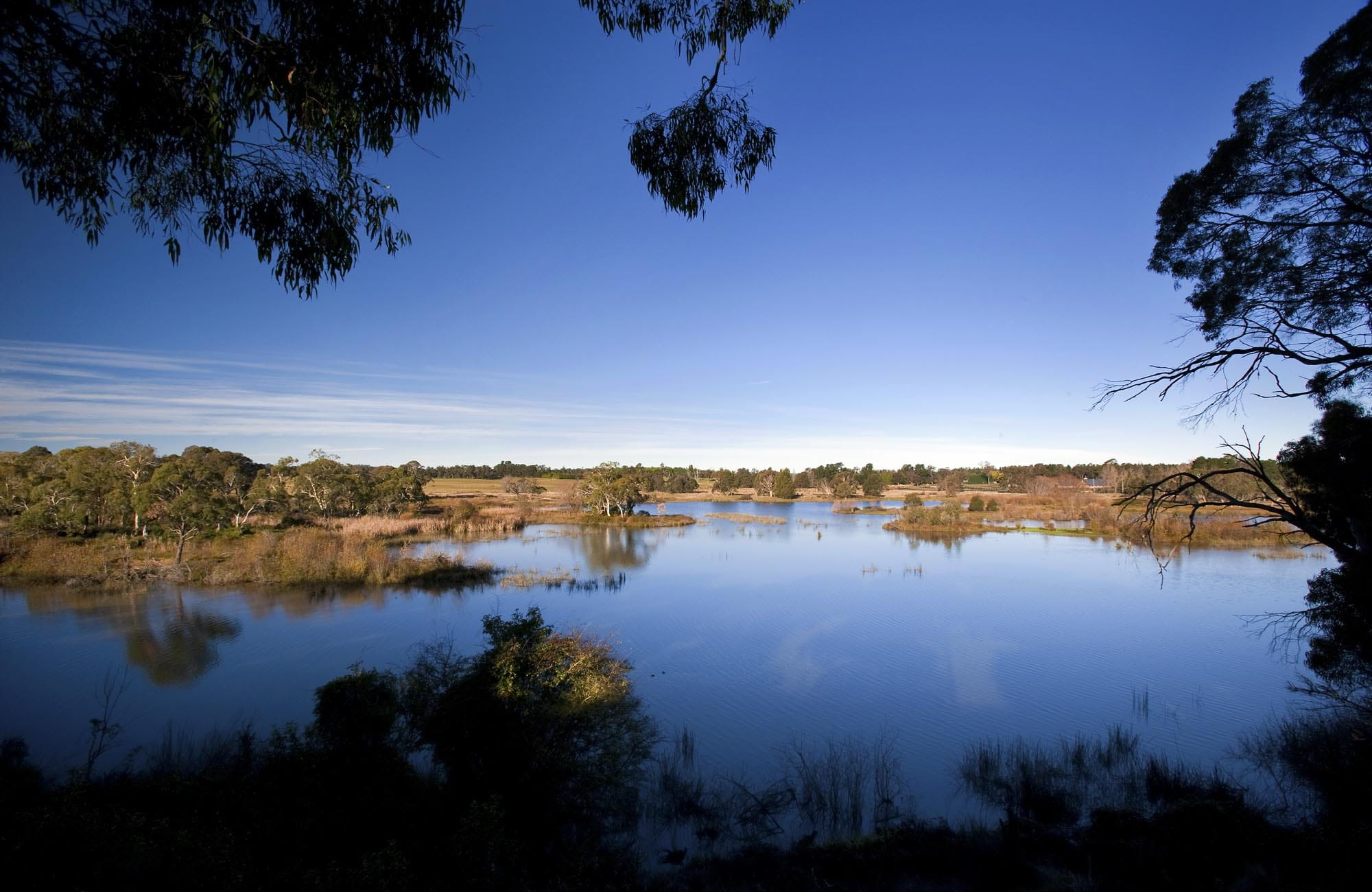