Wanda Wandong campground is set among native eucalypt and wattle trees in the north of Goobang National Park. There’s plenty of space for kids to run around, and adults will love relaxing in the picnic area with its handy picnic tables and barbecues for a smoky, succulent treat.

Explore the park by car, mountain bike, or on foot. Be sure to venture along the small walking trail near the campground entrance that has interpretive signs about native vegetation and Aboriginal cultural heritage of the local area.

Wallabies, kangaroos and echidnas may be seen around the campground too. In fact, you'll see wildlife practically spilling out of the bush. During spring and summer, reptiles such as lace monitors, shingle-backs and blue-tongued lizards can be seen lazing in the sun. Birds of prey and parrots often fly overhead, while kookaburras, thornbills, robins and treecreepers move between the trees within the campground. At night, grab your torch to spot possums, sugar gliders, small bats and boobook owls in the treetops.

For the latest updates on fires, closures and other alerts in this area, see https://www.nationalparks.nsw.gov.au/camping-and-accommodation/campgrounds/wanda-wandong-campground/local-alerts

All the practical information you need to know about Wanda Wandong campground.

Wanda Wandong campground is in the Wanda Wandong sector of Goobang National Park. Take the northern entrance into the park off Gundong Road. On entering the park, veer to the right and after a short drive, you’ll arrive at the campground.

Parking is available at the Wanda Wandong campground.

There are lots of great things waiting for you in Goobang National Park. Here are some of the highlights.

The temperate climate makes it a good time to bushwalk on several different walking tracks or fire trails. More experienced walkers can explore the park further and head off the beaten track. Clear, crisp autumn skies mean stargazing is at its best from Wanda Wandong campground. .

Enjoy the wildflowers and flowering shrubs in full, beautiful bloom. Drive up to Caloma lookout for great views of the surrounding farming country with its mosaic of canola, cereals and pasture paddocks .

Make the most of the free gas barbecues at Wanda Wandong campground to unwind after some active park exploration.

This area is fully wheelchair accessible.

You are encouraged to bring your own supply of firewood.

Wanda Wandong campground is in Goobang National Park. Here are just some of the reasons why this park is special: 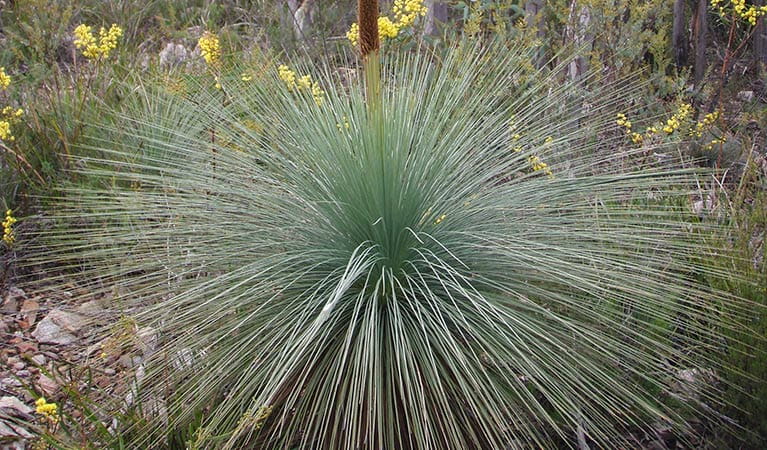