From the picnic area, it’s a short easy stroll along Mount Grenfell art site walk to view Aboriginal rock art, which continues to be deeply significant to Ngiyampaa People.

On the rocky overhangs of Mount Grenfell art site walk are human figures, animals, medicine, waterways, land, and Dreaming stories depicted in red, yellow, and ochre pigment, applied with a finger or brush. Ochres come from naturally tinted clay and are some of the earliest pigments used by humans. You’ll also see stencils created by blowing a mouthful of pigment over a hand held against the rock face.

It’s only a short, easy walk to view three galleries of this spectacular Aboriginal rock art, which have been layered upon each other over time. The site holds particular significance for Ngiyampaa People, who are traditional owners of this land.

Take your time on this walking route past mallee and cypress pines. Sit and listen to birdcalls, and imagine people gathering here at this meeting place from the surrounding area to talk, laugh, argue, pass on knowledge, record information and take part in ceremonies. 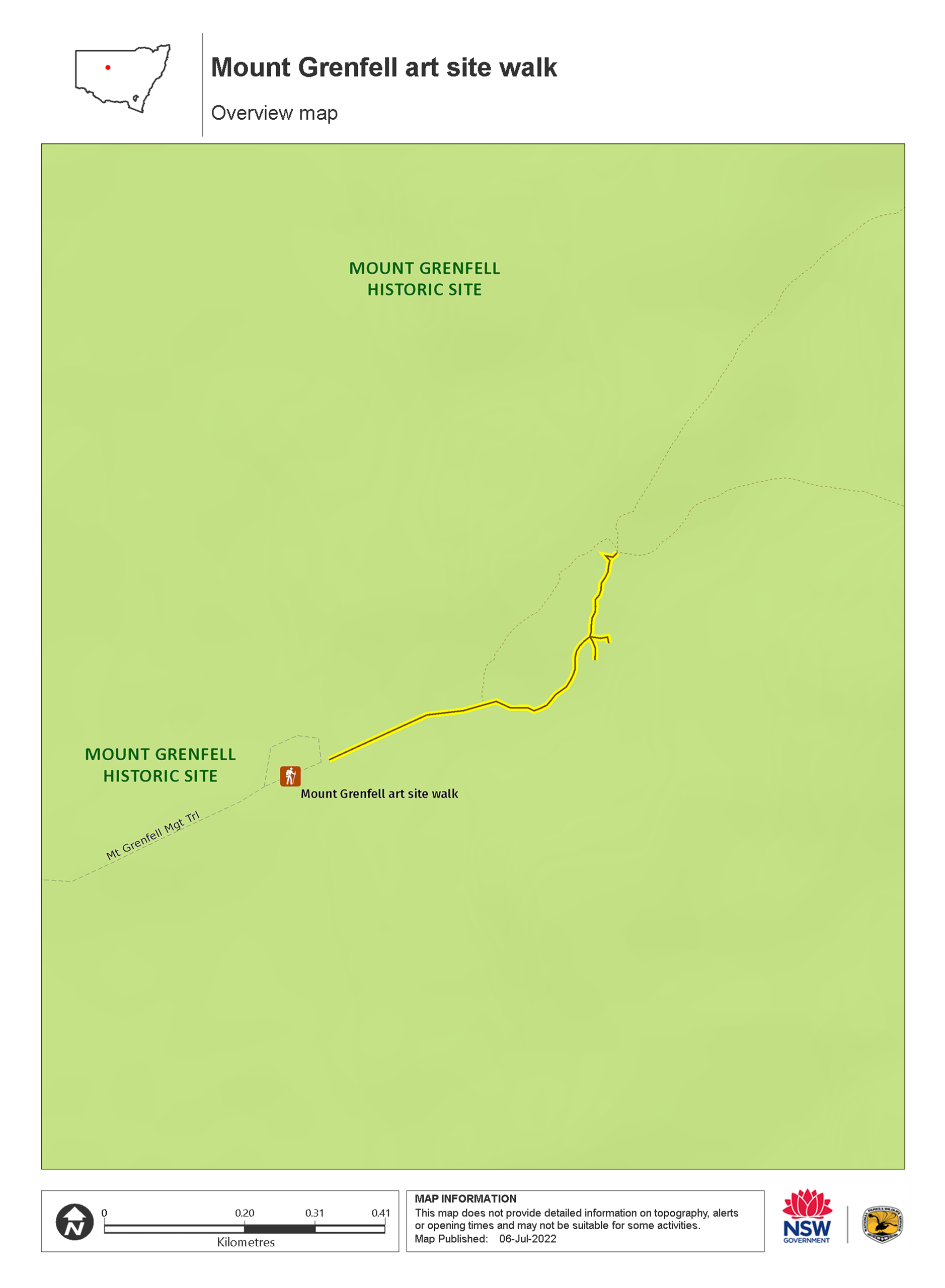 For the latest updates on fires, closures and other alerts in this area, see https://www.nationalparks.nsw.gov.au/things-to-do/walking-tracks/mount-grenfell-art-site-walk/local-alerts

All the practical information you need to know about Mount Grenfell art site walk.

Check the weather before you set out as the road to Mount Grenfell Historic Site can become boggy when it rains.

There are lots of great things waiting for you in Mount Grenfell Historic Site. Here are some of the highlights.

White mallee flowers are blooming and birdwatching is at its best during this season.

This is ideal weather for hiking Ngiyambaa walking track.

This park is in a remote location, so please be well-prepared and tell a family member or friend about your travel plans.

Living off the land 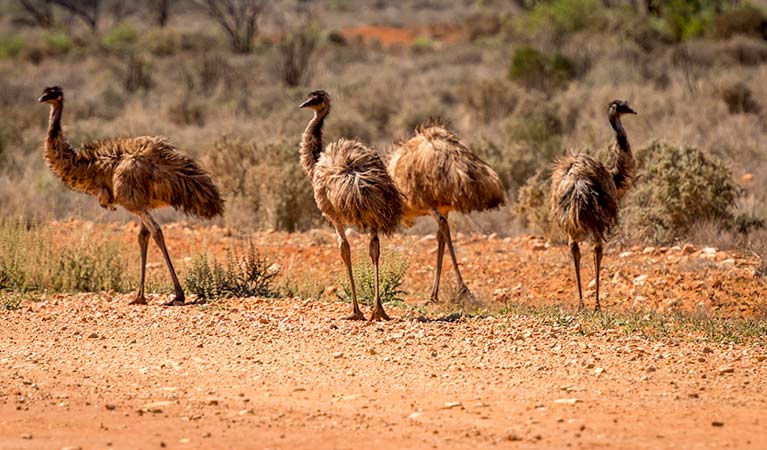 Emus and kangaroos inhabit Mount Grenfell and, on warmer days, you’re likely to see bearded dragons, shinglebacks and geckos. Keep a careful eye out too for endangered kultarr (also known as jerboa pouched-mouse, wuhl-wuhl or pitchi-pitchi), which can best be described as a mouse that hops. While you’re looking down for a pitchi-pitchi, you may also see a red-capped robin rifling through the leaf litter. This bird is often part of a mixed species feeding flock with other similarly sized birds such as thornbills, which also inhabit the park. 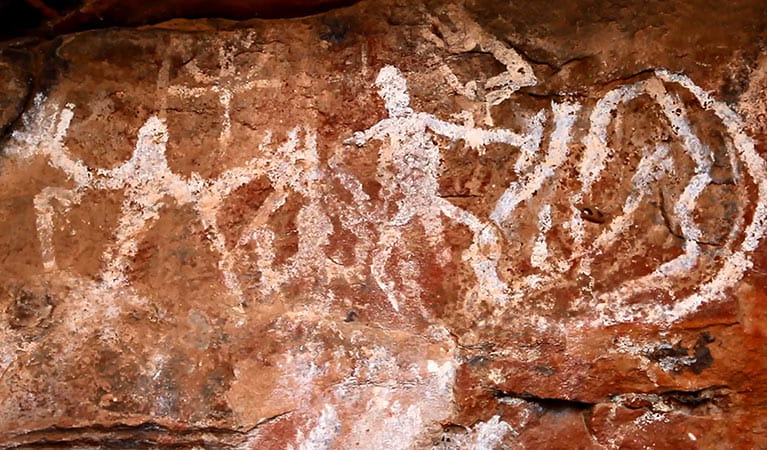 At Mount Grenfell, art featuring all facets of Aboriginal life covers rocky overhangs surrounding the park’s waterhole. Many are linear paintings done by applying wet pigment with a fingertip or natural brush. Others are hand stencils. In some places, ochre and white pipeclay have been applied thickly and left to dry. More recent paintings have been superimposed over older ones. There are stick figures, human figures, images of birds and animals, medicine, food, the landscape and dreaming stories. This art remains deeply significant to Ngiyampaa people.

Ngiyampaa: Past, present and future

The Ngiyampaa (pronounced nee-yam-par) are dryland people associated with the arid plains and rocky hill country of Central West NSW bordered roughly by Lachlan, Darling-Barwon and Bogan Rivers. The semi-permanent waterhole at Mount Grenfell was an important meeting place for generation after generation of this Aboriginal group. Following European settlement, however, Ngiyampaa people were moved to stations northwest of Wiradjuri country and in the 1930s, many were relocated again to Murrin Bridge near Lake Cargelligo. On 17 July 2004, Mount Grenfell was handed back to traditional owners and is now jointly managed with NSW NPWS. Ngiyampaa people maintain strong connections with this area and continue to pass on cultural knowledge.