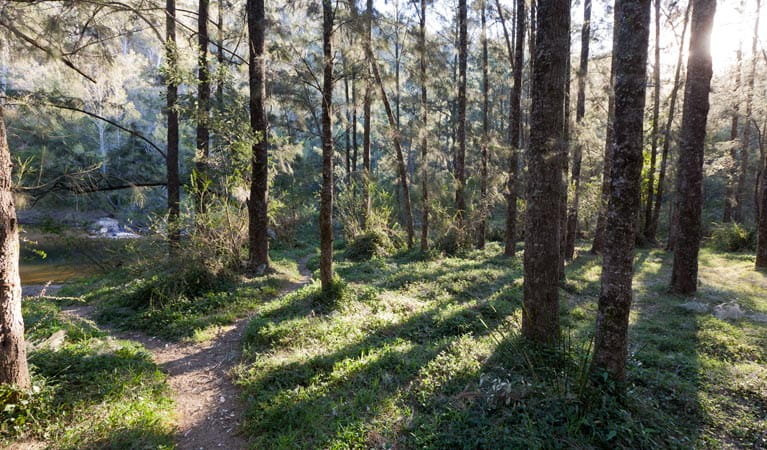 Deua River, Bakers Flat and Dry Creek, spaced along the she-oak lined Deua River, are all great places to camp. Whatever the season, come and enjoy these scenic riverside camping locations, from where you can explore the park or take a day trip to the coast.

In the warmer months, goannas patrol the campgrounds while the semi-aquatic eastern water dragons oversee the goings-on in the river. You’re most likely to spot them sunning themselves on a rock or a branch overhanging the water. Their long muscular tail helps them swim. So make like a water dragon and jump on in.

There are plenty of things to do at Deua River campgrounds, all of which involve relaxation. Walk alongside the river to explore the area a bit more, find a picnic spot on the bank, do a bit of birdwatching to see how many species you can see, and then enjoy a barbecue dinner back at your campsite.

For the latest updates on fires, closures and other alerts in this area, see https://www.nationalparks.nsw.gov.au/camping-and-accommodation/campgrounds/deua-river-campgrounds/local-alerts

All the practical information you need to know about Deua River campgrounds.

Deua River campgrounds are in the eastern precinct of Deua National Park. To get there:

Check the weather before you set out as the road to Deua River campgrounds can become boggy when it rains.

There are lots of great things waiting for you in Deua National Park. Here are some of the highlights.

This season is the best time for wildflowers in the park and for birdwatching.

This is the season for swimming and floating on a lilo down the Shoalhaven and Deua rivers. See if you can spot an eastern water dragon sharing the river with you along the way.

Rubbish bins are not available, so please take your rubbish with you when leaving.

Firewood is not provided and may not be collected from the park.

Deua River campgrounds is in Deua National Park. Here are just some of the reasons why this park is special:

From grassy woodlands on the lower eastern slopes of Deua Valley, to the peatlands and swamps on the tablelands, there are landscapes aplenty at Deua National Park. Valleys dissected by wild rivers, rugged mountains, deep gorges, dry ridges, steep escarpments, limestone karst and high plateaus are also some of the diverse landforms you'll find at Deua National Park. The Big Hole is thought to have been an underground cave until the ceiling collapsed and now is a 96m deep and 50m wide pit. Marble Arch has a car-sized boulder over its entrance and inside this cave are animal remains believed to be thousands of years old. Bendethera Cave is over 250m long, 320m wide and contains massive limestone formations in caverns with up to 15m high ceilings. Rocky outcrops found throughout the park support unique and rare species of gum trees, like the woila and jilliga ash, whilst the limestone slopes in Bendethera Valley is the only known location of Bendethera wattle; a sight to behold as they blossom during spring. The drier and cooler conditions allow pinkwoods and soft tree ferns to thrive in the higher altitudes of the eastern escarpments, and grey myrtle, lilly pilli and mock olives can regularly be seen along the small creeks and gullies throughout. 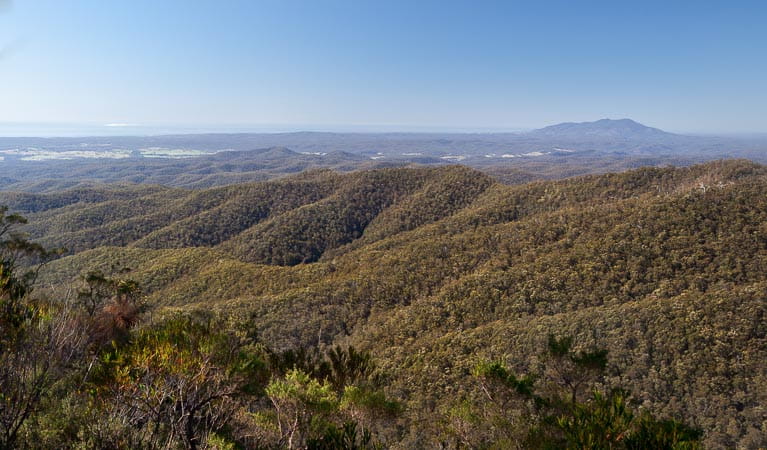 Deua is home to over 106 species of birds. There is a particularly high diversity of birds of prey in the park, such as the powerful owl and the peregrine falcon. The powerful owl is Australia's largest owl. The peregrine falcon, which is the fastest creature in the animal kingdom, can reach over 300km/hr in a high-speed dive when hunting. So if you see a dark vertical blur in the sky over Deua, you'll know now what it is and why it's moving so fast.

The trails of time 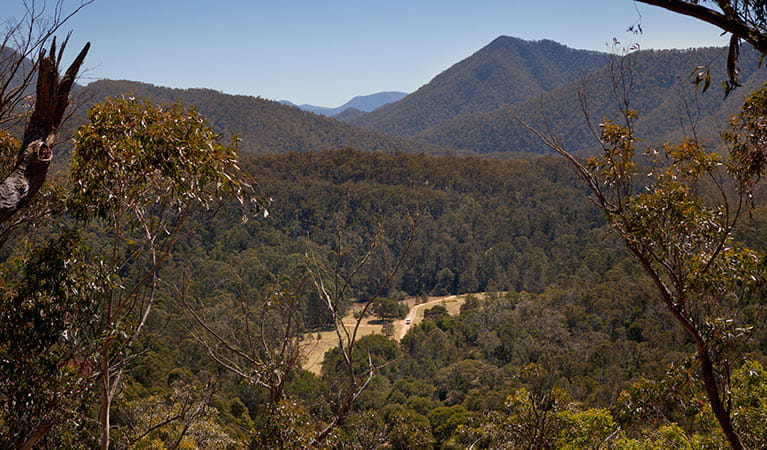 Passed on through generations in story and in song, the history of Aboriginal people of this land and their connection with all that surrounds them is very much a part of what you'll see in Deua National Park. Having travelled up and down the escarpment along well-worn pathways between the coast and the Monaro Tablelands for thousands of years, there are many places of spiritual significance. Scarred trees, grinding grooves and middens can be seen along the 'dreaming trails' of Deua. 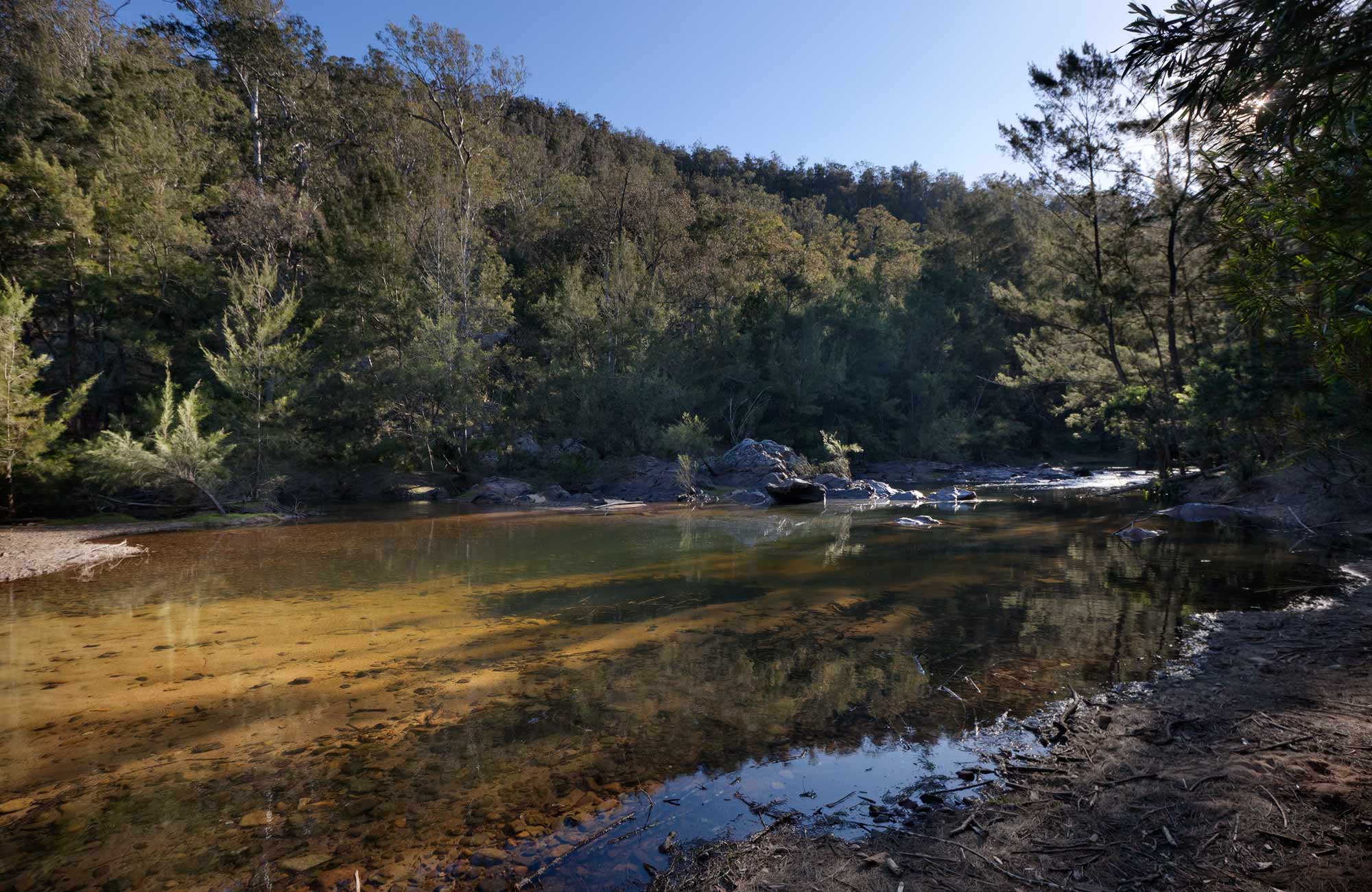