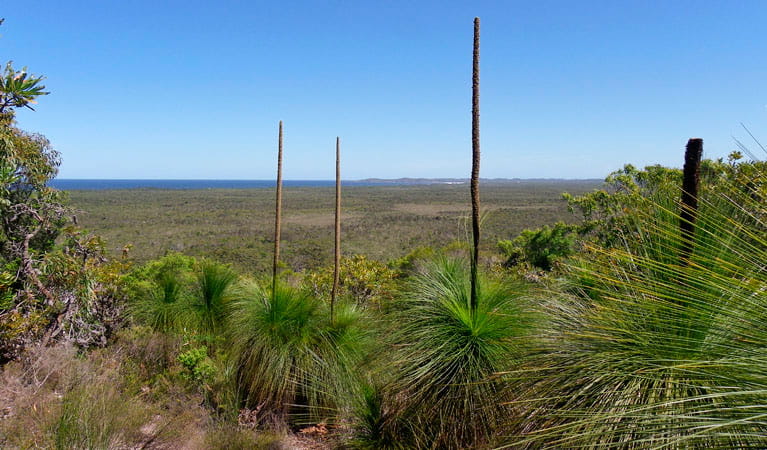 Situated between the villages of Evans Head and Broadwater, Broadwater National Park is a great place for hiking, picnicking, birdwatching, surfing and whale watching.

Broadwater National Park is a great place to visit with friends and family, especially if you enjoy birdwatching. The swamps and marshlands of Broadwater are home to many waders such as ibis, herons and brolgas. The rare jabiru, which is a large stork originally from the Americas, is occasionally sighted around Salty Lagoon.

There’s also a great diversity of animals in Broadwater so keep an eye out for swamp wallabies, red-necked wallabies, echidnas, bandicoots, bush rats, blossom bats and ringtail possums. Early mornings and early evenings are the times when you’re most likely to see these creatures when they’re feeding or hunting.

There are some short walking tracks in Broadwater that lead to beaches where you’ll be able to see examples of the large sand dunes and swale gullies that were formed between the ice ages some 60,000 years ago. In spring and winter, take a look out to sea while you have a picnic and enjoy some whale watching.

For the latest updates on fires, closures and other alerts in this area, see https://www.nationalparks.nsw.gov.au/visit-a-park/parks/broadwater-national-park/local-alerts

All the practical information you need to know about Broadwater National Park.

There are lots of great things waiting for you in Broadwater National Park. Here are some of the highlights.

Enjoy a beach walk in the milder weather, birdwatching as you go.

Wildflowers at this time of year will just about knock your walking socks off with their vivid and varied colours This is the peak season for seeing migrating whales swimming closer to shore with their new calves .

When the weather's hot, the best thing to do is go swimming or have a surf.

This is the peak season for northern migration of whales.

Evans Head is a peaceful, coastal fishing village located on the banks of the Evans River.

Ballina is a bustling holiday town and service centre and home of the Big Prawn. It's situated at the mouth of the Richmond River, close to superb beaches.

Lismore is a major North Coast commercial, cultural and administrative centre. It's set in undulating country on the north arm of the Richmond River.

Broadwater National Park is a special place. Here are just some of the reasons why: 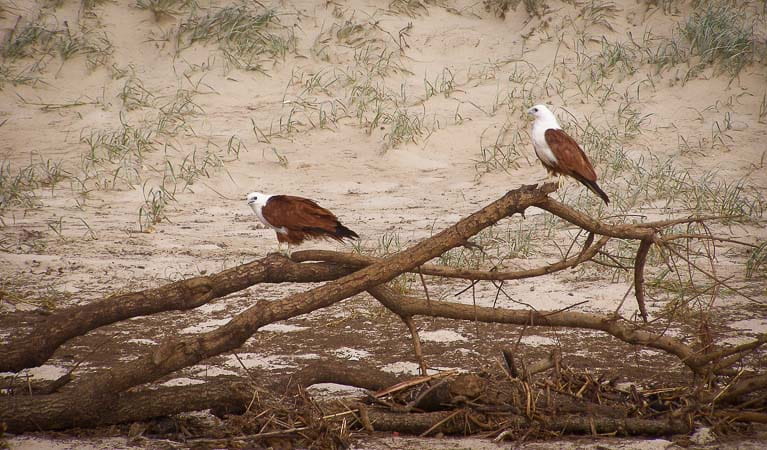 Broadwater is a refuge for migratory shorebirds, a hunting ground for birds of prey and habitat for a broad range of birds that inhabit the park's various plant communities. These include threatened species such as pied oystercatchers, little terns and beach stone curlews. White-bellied sea eagles can also often be seen trawling the coastline. This raptor is widely revered by Aboriginal people in many parts of Australia. An opportunistic carnivore, you may be lucky enough to see one of these birds seizing waterborne prey in its talons as it flies low over the water. Its honking call could easily be mistaken for that of a goose. 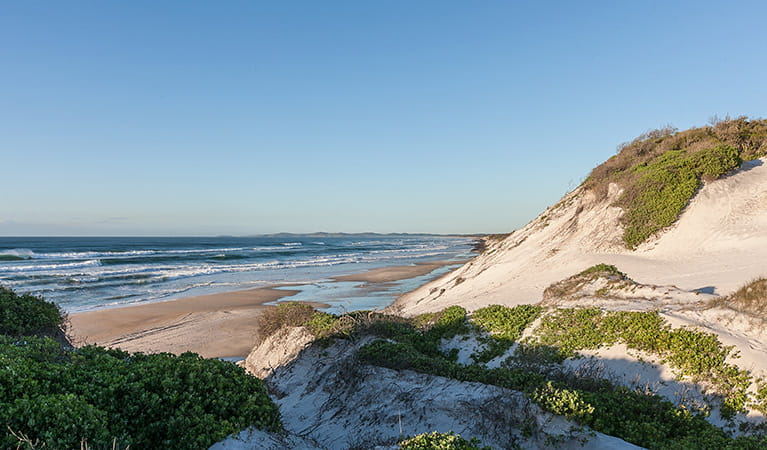 Airforce Beach seems like an unlikely name for a pristine stretch of sand near a national park, but during World War II, the airfield at Evans Head was used as a training ground. No. 1 Air Observers School was stationed there until it disbanded in 1943. 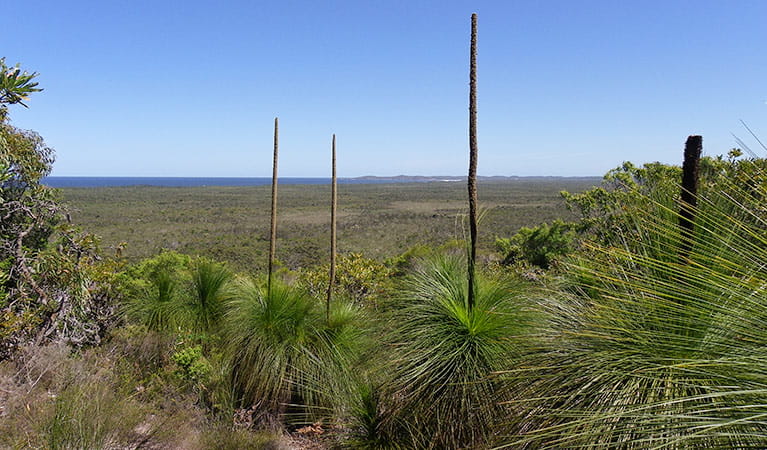 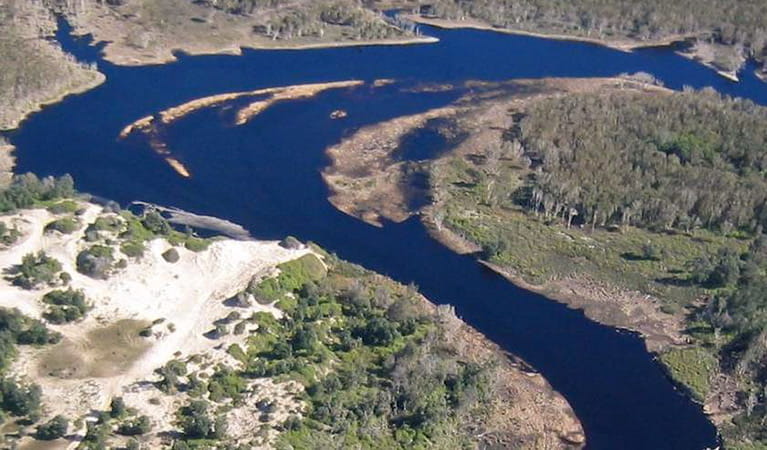 The traditional custodians of this northern coastal area of NSW, of which Broadwater National Park is now a part, are the Bandjalung People. Bundjalung National Park lies just south of Broadwater. These people continue, today, to actively celebrate their rich culture and heritage. Notable Bandjalung People include musician Troy Cassar-Daley, boxer Anthony Mundine, Australian Aboriginal leader Warren Mundine and chef Mark Olive. This park is one of a group where the Bandjalang People's native title rights have been recognised in only the third determination of native title rights in New South Wales. Native title rights come from the Bandjalang People's traditional laws and customs and legally recognise the Bandjalang People's connection to Country. This means that these lands will continue to be places of ceremony, learning and inspiration for generations to come. Find out more.

Broadwater National Park has management strategies in place to protect and conserve the values of this park. Visit the OEH website for detailed park and fire management documents. 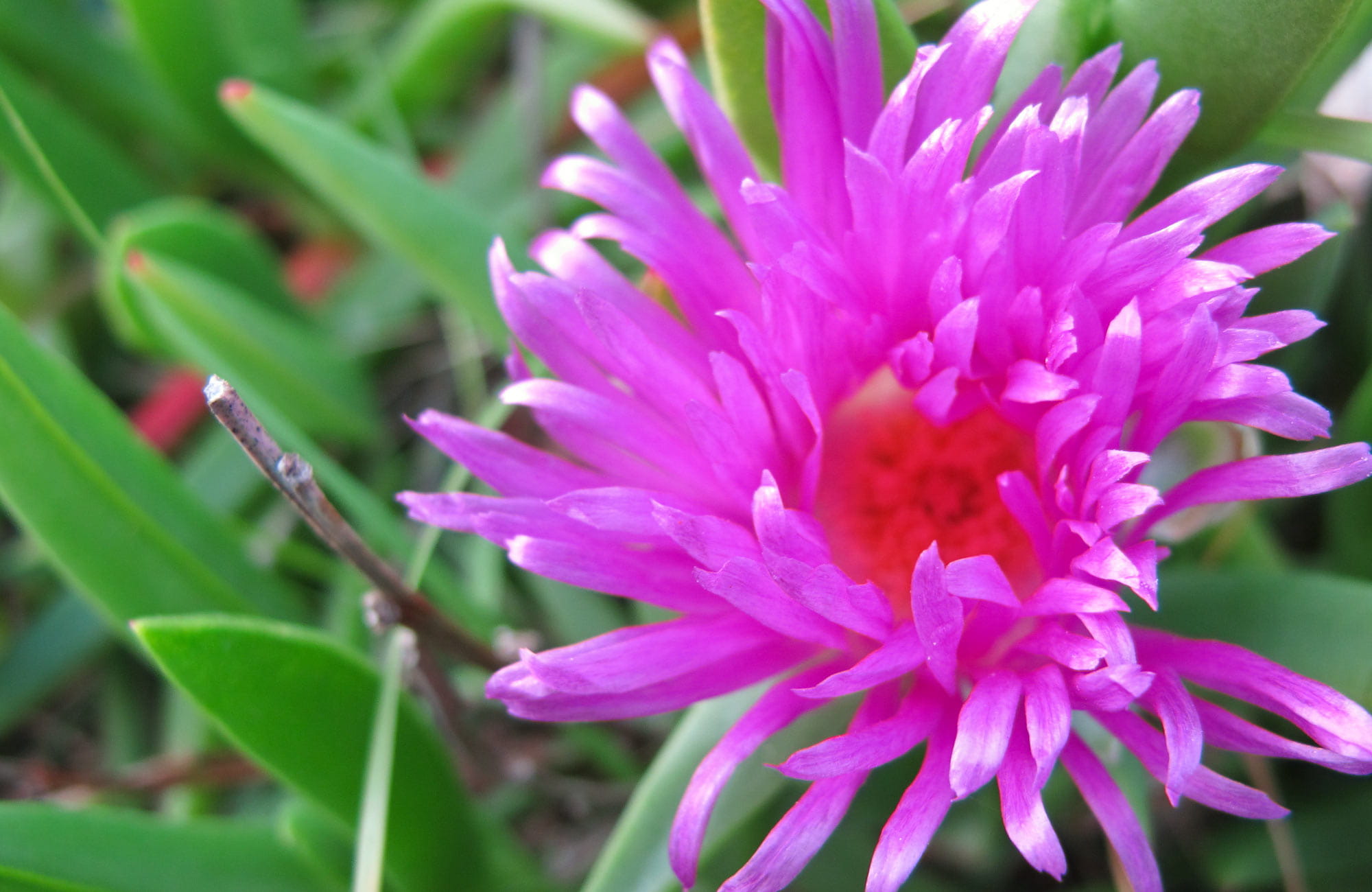